We’ve been following the Olympia personal income tax proposal since spring. It’s been a meandering journey.

And on and on. We surely missed some steps. And now it’s come to this: The City Council has gone to court to block the income tax initiative from the ballot.

The city filed a complaint July 22 in Thurston County Superior Court that seeks a judge’s opinion regarding legality of the initiative and whether the city has the power to tax residents’ income.

Sponsored by a group called Opportunity for Olympia, the initiative calls for a 1.5 percent tax on Olympia households with income in excess of $200,000 to raise an estimated $3 million a year for a public college tuition fund.

Read the story for details, but it seems that the city has decided, no doubt correctly, that the whole thing is too big a hassle and too costly to pursue.

City Manager Steve Hall told the council that the “no action” decision will move both sides toward a court hearing, possibly before the November ballot. Hall said the goal is to get a legal conclusion about the initiative before the city spends more time and money on it.

Proponents are unhappy. The road toward the ballot can be expected to twist and turn a few more times before the journey is done.

Speaking of tax controversy, who knew that agreeing on the effects of a massive business tax could be difficult? The Oregonian has an informative look at efforts by backers of an initiative that would raise Oregon’s business taxes by $3 billion to influence the impact analysis.

Backers of a $3 billion corporate tax measure on the November ballot repeatedly pushed for changes in a Portland State University economic review of the proposal, delaying the report for several months.

Our Oregon, the group pushing the tax proposal, commissioned the study, was anything but hands-off.

The university economists appear to have largely rebuffed requests for substantial changes. They found new tax revenue would add 33,600 government jobs by 2027, but with 13,500 fewer private sector jobs. They also echoed concerns that businesses would raise prices, with the burden falling disproportionately on low and middle income households.

But the tension and back-and-forth testify to the high stakes in a ballot fight that’s sharply divided Oregon’s political factions and looms as one of the most hard-fought campaigns in state history.

Finally, capital gains taxes, which have been proposed here several times in recent years, are the subject of this week’s Tax Foundation map. 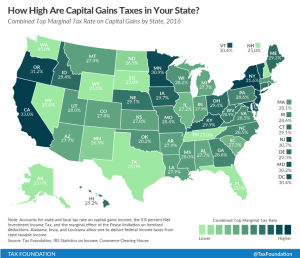 That’s because the capital gains tax is an income tax.

UPDATE: We asked the author of the Tax Foundation bulletin about the 25 percent rate for the states without a personal income tax, given that the maximum federal capital gains tax rate is 20 percent. Here’s her reply:

The extra 5 percent above the 20 percent federal rate consists of the net investment income tax of 3.8 percent, and the marginal effect of the Pease limitation on itemized deductions. We have an article on how the Pease limitation actually operates as a surtax if you are interested in reading further. You can read it here: http://taxfoundation.org/blog/pease-limitation-itemized-deductions-really-surtax