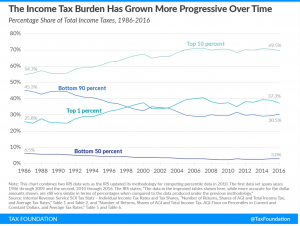 A reminder from the Tax Foundation: The federal income tax is highly progressive. And the degree of progressivity has grown over time.

Data from the Internal Revenue Service (IRS) shows us who pays federal income taxes. As illustrated below, higher-income taxpayers are responsible for paying a significantly higher share of the tax, and this trend has increased over the past three decades. For instance, in 2016, the top 1 percent of taxpayers paid about 37 percent of federal income taxes, more than twelve times the tax burden of the bottom half of taxpayers.

Previously, citing the work of the Washington Research Council and others, we’ve discussed “fiscal federalism.”

We bring this up as further evidence of the role fiscal federalism plays in state-local tax and spending policy. A WRC report released last year lays out the concept (we discussed it here). An excerpt:

Mr. Cuomo notes in a PowerPoint presentation that “anecdotal evidence suggests that high income taxpayers are considering changing their residence and that financial industry firms are looking at real estate outside of New York.” While the Governor blames the GOP tax reform, high earners have been decamping for years, as E.J. McMahon of the Empire Center has chronicled.

Fiscal federalism lessens the likelihood of what the WSJ calls “geographic tax arbitrage” by reducing the incentives for high income taxpayers to relocate to minimize their tax burdens. Further, recall that the federal government also provides the bulk of spending designed to benefit lower income households, funded in large part by taxes paid by the nation’s most wealthy.

The Tax Foundation also points out the effect of the recent federal tax reform, with the lowest income group having a negative tax liability.

In 2017, the projected average tax rate for all taxpayers was 10.3 percent, and this was projected to decrease to 9.2 percent for 2018. This decrease is largely due to the Tax Cuts and Jobs Act, under which 80 percent of filers will see a lower tax liability in 2018, with another 15 percent having no material change. Notably, the Joint Committee on Taxation projects that average tax rates will decrease across the income spectrum—not a single income group is projected to see an average tax increase. Taxpayers with adjusted gross incomes of $50,000 and below are projected to have a negative tax liability on average in 2018.