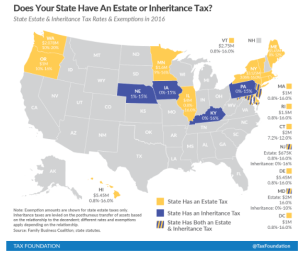 According to the group,

Currently, fourteen states and the District of Columbia impose an estate tax while six states have an inheritance tax. Maryland and New Jersey have both.

The state with the highest maximum estate tax rate is Washington (20 percent), followed by ten states and the District of Columbia with a top rate of 16 percent.

Washington lawmakers passed an estate tax in 2005. Initiative 920, a 2006 attempt to repeal the legislation, was rejected 38-62. The legislative summary of the initiative provides useful context.

Initiative 920 (I-920) repeals the estate tax passed by the legislature during the 2005 legislative session in ESB 6096. This bill enacted a stand-alone estate tax for Washington after the Supreme Court held in Hemphill v. Dep’t of Revenue that the estate tax was a “pick-up” tax and not an independently operating estate tax. In effect, the court held that Washington’s estate tax must fully conform to the changes in the federal tax law made in 2001 and invalidated the state tax to the extent it exceeded the federal tax credit.

The revenues from the tax were targeted for education, a factor emphasized during the I-920 campaign by those opposed to repealing the tax. A Washington Research Council analysis of I-920 noted that the tax touched few Washingtonians directly and added an economic observation.

But the decision on the whether to continue Washington’s estate tax is not simply about the distributions of either wealth or the tax burden. By eliminating the credit against the federal estate tax for state estate taxes, the Economic Growth and Tax Relief Reconciliation Act opened up the estate tax as a front in the ongoing tax competition among the states. Estate taxes drive away wealthy citizens, with a negative impact on the state economy.

Estate and inheritance taxes have large compliance costs, tend to suppress entrepreneurship, and are among the most harmful taxes to economic growth, which helps explain why states continue to shift away from them.

It’s clear that lawmakers face continued pressure to fund education, just as they did a decade ago when they adopted the estate tax. Yet they should remember that the best tax strategies are those that stimulate economic growth and investment.