It’s been a while since we’ve written about income inequality (see here and here). The Tax Foundation recently examined the question: How much is the government already redistributing income through the tax code? The answer may surprise you, though it’s consistent with our 2019 post: U.S. federal income tax structure “most progressive” in the world, more than offsets regressively of state/local taxes .

According to a recent Congressional Budget Office (CBO) study titled The Distribution of Household Income, 2016, more than half of American households received more in entitlement benefits than they paid in taxes in 2016. 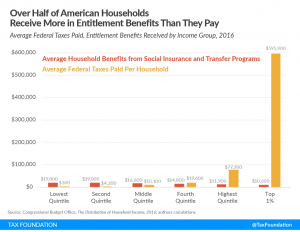 Reports on tax policy (regressive, progressive, whatever) that fail to acknowledge the way the tax code transfers income through entitlements inevitably mislead. For a more complete look at the challenges of measuring transfer payments, particularly through self-reports on consumer surveys, read this Washington Research Council analysis.

The CBO data shows that households in the poorest income group (couples earning less than $32,500) paid an average of $300 in federal taxes and received nearly $20,000 in social insurance and means-tested entitlement benefits.

In other words, they received $66 in social insurance and transfer benefits for every $1 they paid in federal taxes.

By contrast, the wealthiest 1 percent of households (couples earning over $546,800) receive just $0.02 in benefits for every $1 of federal taxes they paid.

There are limits to how much work the tax code can do to reduce income inequality. Hodge makes this point in a thought experiment in the article. Rather than copy it here, we encourage you to examine it. His conclusion, however, merits attention as the topic will surely reemerge in the coming months.

A more realistic and sustainable way to improve the lives of low- and middle-income Americans through the tax code would be to focus on policies that promote economic growth, create jobs, and boost real wages.