The Tax Foundation posts a new map of state inheritance and estate taxes, with commentary by TF analyst Janelle Cammenga. A quick glance at the map below shows the majority of states levy neither tax. 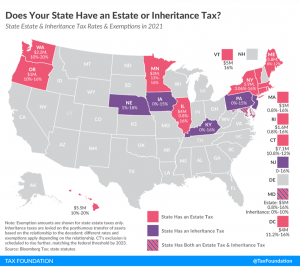 In addition to the federal estate tax, with a top rate of 40 percent, some states levy an additional estate or inheritance tax. Twelve states and the District of Columbia impose estate taxes and six impose inheritance taxes. Maryland is the only state to impose both.

We mention this again (earlier post here) because some state lawmakers have proposed raising the estate tax rate. Melissa Santos reported in Crosscut earlier this month,

At least one proposal aims to increase taxes on wealthy people’s estates that they pass on when they die. House Bill 1465, sponsored by state Rep. Tina Orwall, D-Des Moines, would increase the tax rate on estates valued at $3 million or more. While right now the highest tax rate applied to wealthy people’s estates is 20%, Orwall’s proposal would increase the maximum tax rate to 40%, which would apply to estates worth at least $1 billion.

Other changes to the estate tax may be proposed as the legislative session continues. Lawmakers may also introduce new taxes as they flesh out a new two-year state operating budget later this spring.

While most attention has shifted to a proposed capital gains tax, as Santos writes, until the budget is adopted and lawmakers adjourn, taxes remain in play. So it’s worth noting Cammenga’s analysis for the Tax Foundation,

Connecticut continues to phase in an increase to its estate exemption, planning to match the federal exemption by 2023. However, as the exemption increases, the minimum tax rate also increases. In 2020, rates started at 10 percent, while the lowest rate in 2021 is 10.8 percent. Connecticut’s estate tax will have a flat rate of 12 percent by 2023.

Vermont also continued phasing in an estate exemption increase, raising the exemption to $5 million on January 1, compared to $4.5 million in 2020.

The District of Columbia moved in the opposite direction, lowering its estate tax exemption from $5.8 million to $4 million in 2021, but simultaneously dropping its bottom rate from 12 to 11.2 percent.