The Tax Foundation has announced that Tax Freedom Day for 2019 arrives nationally April 16. The annual announcement is often watched closely as an easily understood measure of tax burden. Here’s how the Tax Foundation describes it.

Tax Freedom Day® is the day when the nation as a whole has earned enough money to pay its total tax bill for the year. Tax Freedom Day takes all federal, state, and local taxes and divides them by the nation’s income. In 2019, Americans will pay $3.42 trillion in federal taxes and $1.86 trillion in state and local taxes, for a total tax bill of $5.29 trillion, or 29 percent of national income. This year, Tax Freedom Day falls on April 16, or 105 days into the year.

Of course, state and local burdens vary among locales, so the Tax Foundation also provides an estimate by state. As the map below shows, Washington ranks among the states with a heavier tax burden, with Tax Freedom Day arriving here April 20, four days after the national date. 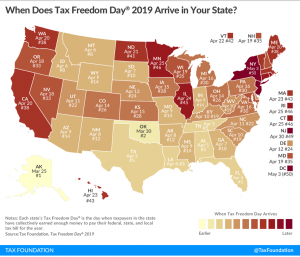 The Tax Foundation explains the reasoning.

The total tax burden borne by residents of different states varies considerably due to differing state tax policies and the progressivity of the federal tax system. This means that states with higher incomes and higher taxes celebrate TFD later: New York (May 3), New Jersey (April 30), and Connecticut (April 25). Residents of Alaska will bear the lowest average tax burden in 2019, with Tax Freedom Day arriving on March 25. Also early are Oklahoma (March 30), Florida (April 4), and Louisiana (April 4).

Washington is a high income state, with taxpayers who pay relatively higher taxes under the progressive federal income tax structure. As the Washington Research Council has explained, fiscal federalism recognizes the interplay among federal, state and local taxes.

Earlier, the Tax Foundation reported that one-third of those filing tax returns have zero income tax liability; the top 1 percent pay 37.3 percent. As the chart below, from the Tax Freedom Day announcement, shows, federal income taxes far overshadow state and local taxes in calculations of the overall tax burden. 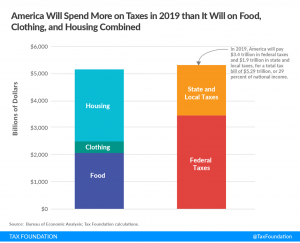 With lawmakers spending a lot of time in the next few weeks considering changes in the state tax structure, clearing up misconceptions regarding the way the current system works should be a priority. Among the things to remember: Washington’s tax structure is relatively stable, has produced substantial revenue growth since the recession, and has nurtured a vibrant private sector economy.

And, for those for whom it’s a concern, as the late Tax Freedom Day demonstrates, high income taxpayers in Washington pay considerable federal income taxes.