With a perplexing Appeals Court ruling breathing surprising -though likely short-lived – life to Seattle’s efforts to impose a municipal income tax, a new Tax Foundation report on local income taxes may be of interest. As the map below shows, they’re not common. 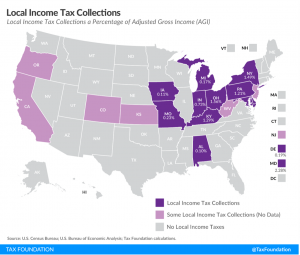 Although the majority of U.S. cities and counties do not impose a local income tax, they are imposed by 4,964 jurisdictions in 17 states. Ranging from de minimis wage taxes in some states to a statewide average of nearly 2.3 percent of adjusted gross income in Maryland, these taxes are a long-standing and significant source of revenue for many cities in Rust Belt states in the northeastern United States.

He provides some interesting background on the evolution of state and local income taxes, including this:

New York City was actually the first city to adopt an income tax ordinance, approving one in 1934, but city leaders developed cold feet, repealing the tax before it could take effect in 1935. After Philadelphia’s 1939 tax, it would be another seven years for another city to follow, with Toledo, Ohio becoming the second to make a foray into municipal income taxation in 1946.

When Seattle adopted its income tax ordinance in 2017, remember, the Tax Foundation wrote,

That could change though, as the Seattle City Council this week passed a local ordinance to enact an income tax on Seattle residents. The tax, which is 2.25 percent on income above $250,000 for single filers and above $500,000 for married filers, was unanimously adopted by the council on Monday.

The only problem is that the tax is almost certainly illegal under the state constitution and under state statute.

Two years on, it’s still illegal. We’ll have to wait until the state Supreme Court addresses the issue. But it’s likely when the local income tax map is next updated, Washington will still be a state with no income tax. And maybe for a long time beyond.