The Tax Foundation is out with a new property tax ranking. Washington comes in in the middle of the pack, as the map below shows. (We admit it; we like their maps.) 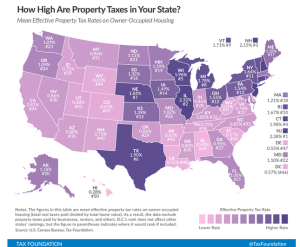 With an effective property tax rate of 1.09 percent, Washington ranks No. 23. The rates are based on owner-occupied housing. The Tax Foundation explains,

Today’s map cuts through [the] clutter [of the variations in state property tax policies, credits and exemptions], presenting effective tax rates on owner-occupied housing. This is the average amount of residential property tax actually paid, expressed as a percentage of home value.

The range is surprisingly wide.

Although the TF numbers are for residential property, it’s important to recognize business’s property tax payments. We looked at the business tax dollar in our research report.

Property taxes represent about  one-quarter of the business tax burden in Washington.  We wrote,

For a good primer on property tax policy, it’s hard to beat this 2008 report from the Washington Research Council.