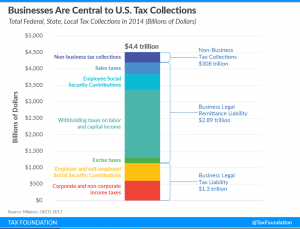 We’ve written often about the high rate of business taxation in Washington. Earlier this year, for example, we reported on an interstate study of business taxes by the Council on State Taxation that found Washington businesses pay $5,700 in taxes per employee, seventh highest among states in the nation.

Businesses role as tax collector, however, is not as frequently discussed. A new report from the Tax Foundation, from which the above chart is taken, sheds light on the issue. TF president Scott A. Hodge writes,

…American businesses are critical to the tax collection system at every level of government—federal, state, and local. Businesses either pay or remit more than 93 percent of all the taxes collected by governments in the U.S. Without businesses as their taxpayers and tax collectors, American governments would not have the resources to provide even the most basic services.

In 2017, Organisation for Economic Co-operation and Development (OECD) economist Anna Milanez measured the amount of taxes that businesses in 24 countries contributed to the overall tax collection system. The U.S. was found to be one of the most “business dependent” tax systems in the industrialized world.

The short article provides all of the important detail. The crux: