The surge in unemployment claims has been a major story in this pandemic. We wrote about it yesterday; the Washington Research Council has more here and here. A new Tax Foundation map provides some good perspective, showing that while the surge is not uniform among the states, all are struggling during the lockdown. 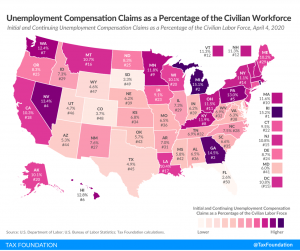 Approximately 8.4 percent of the U.S. civilian labor force has now applied for or is receiving unemployment compensation benefits (through April 2, the latest data). The previous high was 7.9 percent early in 1975 during a recession, with a Great Recession peak of 4.8 percent between February and April 2009. Entering March 2020, unemployment claims as a percentage of the civilian labor force stood at 1.4 percent.

Washington’s 12.4 percent ranks the state seventh-highest in the nation for share of the workforce applying for or receiving benefits.

Critically, Washington’s trust fund is in better shape than most.

Many states are woefully unprepared for the magnitude of the challenge ahead. Entering the crisis, 21 states’ unemployment compensation trust funds were below the minimum recommended solvency level to weather a recession. Six states had less than half the minimum recommended amount, representing 37 percent of the U.S. population.

Crucially, a solvency level of 1 indicates the ability to pay out claims for one year during a Great Recession-like event, and as of April 2, nearly 14.4 million people had filed for unemployment, 283 percent of the worst Great Recession level. A level of 1 now suggests the ability to pay out current claims for only a little over 18 weeks. A state like California, with a solvency level of 0.21, can cover less than four weeks before drawing upon other funds or borrowing from the federal government. Federal loans must be paid back, potentially with interest, and can eventually yield higher federal unemployment insurance tax rates on businesses in that state.

Here’s the map, showing Washington ranking 21st, with a solvency level of 1.18. Note the wide variations among the states. 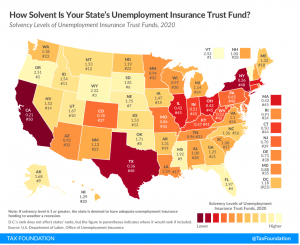 Much more, including interactive links, at the TF post.

It’s been a while since the Legislature spent much time on unemployment insurance issues. Expect that to change in 2021.