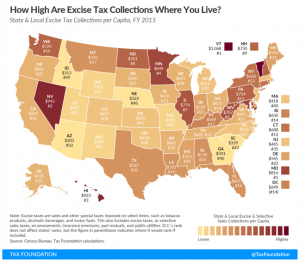 The Tax Foundation reports that Washington state and local governments collect $720 in excise taxes per capita, ranking us 10th highest in the nation. As the map above shows, border states Idaho (#49) and Oregon (#29) each rely much less on excise tax collections.

Unlike a tax on a general base (like income or consumption), an excise tax is a tax on a specific good or activity. Excise taxes are commonly levied on cigarettes, alcoholic beverages, soda, gasoline, insurance premiums, amusement activities, and pari-mutuels (betting), among other goods and activities.

As the Tax Foundation writes, these taxes are often imposed as a quick way to raise money. And, as we’ve recently seen with the Seattle soda tax, they often come with another agenda.

To increase the chances of political viability, many proposed excise taxes come in the form of “sin” taxes on specified activities (such as smoking or drinking or gambling), with advocates touting the perceived public health benefits that result when higher prices lead to reduced consumption. However, since reduced consumption naturally leads to a decline in revenue, the goals of raising revenue while reducing consumption are contradictory.