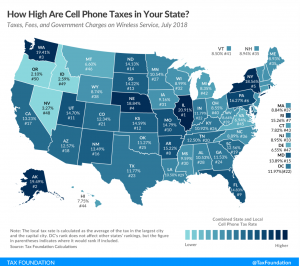 The Tax Foundation reports that Washington imposes the third highest cell phone taxes in the nation, behind just Illinois and Alaska.

Coming in No. 3 is actually a bit of an improvement; Washington used to top the list. No, you didn’t miss a tax cut. The top two got more aggressive.

In 2018, due to a large increase in 911 fees in Chicago and statewide, Illinois surpassed Washington state with the highest wireless tax rates in the country at 27.55%, followed by Alaska at 26.13%. Alaska’s state universal service fund surcharge has increased dramatically in the last few years, vaulting Alaska into its position as the second highest wireless tax state. Just two years ago, Alaska was not even in the top 10.

Tax policy discussion continue to come to the forefront in our state. What often gets overlooked in the broad brush debate is the affect of selective, targeted sales taxes: tobacco, alcohol, soda, etc. And, surely, there are those who place talking on cell phones in the sin tax category (particularly on buses and in restaurants). The Tax Foundation notes the broad policy argument:

One of the longstanding arguments for reform of wireless taxation is the disparity in tax burdens on wireless as compared to broad-based consumption taxes imposed on other goods and taxable services subject to sales and use taxes. Wireless and other telecommunications are one of the few services that are consistently subject to sales and use taxes by states with both narrow and broad sales tax bases. Furthermore, states like Delaware, Montana, and New Hampshire that do not impose a sales tax have specific taxes on wireless and other communications services.

TF includes a table (click through to the study for more detail) that ” ranks the states by comparing the disparity between the tax rates imposed on wireless service to the combined state and local sales tax rate in each state.” Washington, with a relatively high overall sales tax rate, nonetheless comes in near the top of the disparity rankings.

Alaska leads all states in this regard, imposing wireless taxes that are nearly eight times higher than average sales tax rates—19.5% vs 2.5%. Other states with large disparities include Nebraska, Illinois, New York, Washington, and Pennsylvania.

Why does it matter?

Wireless consumers continue to be burdened with higher taxes, fees, and surcharges in many states and localities across the United States. With state and local governments continuing to face revenue challenges, the wireless industry and its customers continue to be an attractive target for raising new revenues. Excessive taxes on wireless consumers disproportionately impacts poorer families and may have ramifications for long-term state economic development and growth. Higher taxes on wireless service, coupled with increased taxes on wireless investments, may lead to slower deployment of wireless network infrastructure, including fourth and fifth generation (“4G” and “5G”) wireless broadband technologies—a key element to the future success of Smart Cities.