The Tax Foundation has released another tax map, this one comparing states on their reliance on sales taxes. Unsurprisingly, we’re No. 1. 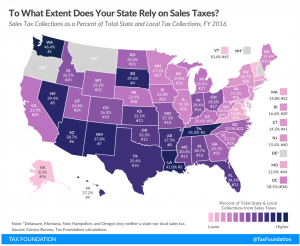 Of the top sales tax states, she writes,

Washington—which has neither a corporate nor an individual income tax but levies a harmful gross receipts tax on businesses—relies the most on sales tax revenue, which accounts for 46.4 percent of its total tax collections. Tennessee, which does not tax wage income and will fully repeal its tax on investment income by 2021, has the second-highest reliance on sales taxes at 41.5 percent of state and local tax collections. Louisiana is the third-most reliant on sales tax revenue, with 41.0 percent of tax collections attributable to sales taxes. South Dakota, which does not collect corporate or individual income taxes, is next with 39.6 percent.

Although Washington, Tennessee, South Dakota, and Nevada (39.4 percent) all rely heavily on the sales tax, they are not high-tax states. All four states forgo an individual income tax and choose to raise a large portion of their revenue through the sales tax instead.

It’s about choices. And, remarkably, as the Washington Research Council has written, Washington’s choices have led to revenue performance that is similar to that of most states.

As we’ve seen in recent years, revenue growth has been among the highest among the 50 states. And, as Clay Hill with the Association of Washington Business has observed, the truth is that Washington state’s tax system has contributed to the state’s run of economic growth.

Some additional perspective from TF:

The most recent interstate comparisons from TF show Washington ranking No. 28 in property tax reliance.