The Tax Foundation map below indicates each state’s reliance on property taxes as a share of all state and local tax collections. Washington ranks No. 28, with property taxes making up about 28.4 percent of total tax revenues. 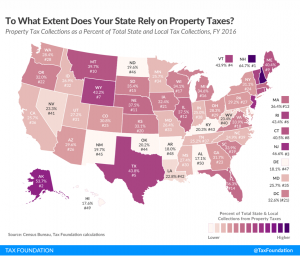 As the map shows, the range is remarkably wide.

Of the 50 states, New Hampshire and Alaska relied most heavily on property taxes, which respectively accounted for 64.7 percent and 53.7 percent of their tax collections in FY 2016. Alabama and Hawaii landed at the other end of the spectrum, raising the smallest portion of their state and local tax revenue through property taxes: 17.1 percent and 17.6 percent, respectively.

Washington’s property tax accounts for 9.3 percent of state taxes, compared to a U.S. average of 2.0 percent. (In other states, property taxes are primarily levied at the local level.) According to the most recent revenue forecast, state property taxes in Washington will increase over the next several years. A second state property tax was enacted in 2017 to help support the increase in school funding required by the state Supreme Court’s McCleary decision…

Additionally, through CY 2021, the two state property taxes are not subject toWashington’s statutory 101 percent rev-enue growth limit (WRC 2017). This means that until 2022, property tax revenues will be reflective of property values. If property values are increasing, more revenues could be collected than if the limit was in place. (Citations omitted.)

With the passage of levy lift legislation for local school districts, property taxes will agin be a major source of discussion in local elections. We thought you might be interested in how Washington compares.