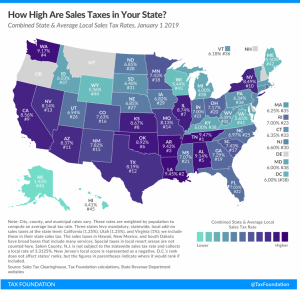 Sales taxes in Washington, we know, are a primary revenue source for state government and a significant revenue contributor to many local governments. As the Tax Foundation map above shows (and, yes, we’re partial to these maps), Washington’s average combined state and local sales tax rate ranks 4th in the nation.

The top state rates are:

She offers some conclusions:

Avoidance of sales tax is most likely to occur in areas where there is a significant difference between two jurisdictions’ rates. Research indicates that consumers can and do leave high-tax areas to make major purchases in low-tax areas, such as from cities to suburbs…

At the statewide level, businesses sometimes locate just outside the borders of high sales-tax areas to avoid being subjected to their rates. ..