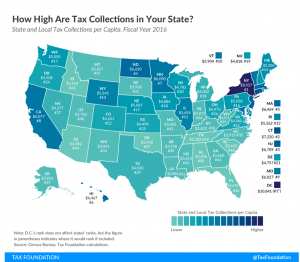 The Tax Foundation recently released a new map detailing per capita state and local tax burdens. That’s it at the top of this post.

Washington ranks No. 17, with per capita state and local tax collections of $5,050, as also reported earlier by the Washington Research Council.

…as a resource-rich state, North Dakota generates a substantial share of its tax revenue from severance taxes on oil and natural gas, the burden of which is borne mainly by consumers outside North Dakota. As a result, in terms of tax collections per capita, North Dakota joins the ranks of the high-tax states in the Northeast even though North Dakota’s tax burden is comparatively low.

That upper-middling tax ranking would rise considerably if the governor’s proposed tax increases were to go into effect.

The proposed capital gains tax comes in again today for criticism from an attorney in Centralia. The Chronicle carries an op-ed from Peter Abborno, who is also a Centralia city councilor. Abborno writes,

The tax increases proposed by the governor will have a chilling effect on economic development and growth for many small and family owned businesses throughout Washington; most notably the capital gains/income tax and the B&O tax increase. As taxes increase, small businesses are stretched even thinner to make capital investments, grow and develop their workforce, and invest in their local communities…

The governor also wants to raise the B&O tax for services from 1.5 percent of gross receipts to 2.5 percent. That would cover everything from accountants, realtors, attorneys, and financial advisers to barbers and cosmetologists…

Service industries seem to be the low hanging fruit for Governor Inslee. And, attorneys most certainly seem like a popular profession tax and punish. Maybe that is because the worst of my profession is glorified on television and Hollywood. Even though the legal profession is a business, many attorneys like myself also represent the poor and indigent, defend victims of domestic violence, plan your estate, establish the next new local small business, and help injured clients. My message to the governor and the Legislature is don’t forget how much attorneys and all our small and family owned businesses contribute to your local community and local economy.

Another reminder that tax policies have consequences.