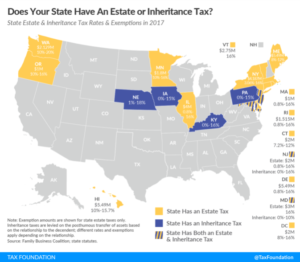 According to the Tax Foundation,

Washington state’s 20 percent rate is the highest estate tax rate in the nation; ten states and DC are next with a top rate of 16 percent. Delaware and Hawaii both have the highest exemption threshold, which, at $5.49 million matches the federal exemption level.

The report points out that 14 states and the District of Columbia impose an estate tax and six states levy an inheritance tax. Two states, Maryland and New Jersey, impose both.

Tax Foundation analyst Morgan Scarboro reports that states are backing away from the taxes.

Indiana repealed its inheritance tax in 2013. Tennessee repealed its estate tax in 2016. New York raised its exemption level to $5.25 million this year and will match the federal exemption level by 2019. The District of Columbia is set to conform to the federal level this year after meeting its revenue triggers. New Jersey will fully phase out its estate tax by 2018.

Among the reasons cited for moving away from the tax:

Last year, we wrote of the Washington estate tax, then as now prompted by the Tax Foundation report.

Washington lawmakers passed an estate tax in 2005. Initiative 920, a 2006 attempt to repeal the legislation, was rejected 38-62…The revenues from the tax were targeted for education, a factor emphasized during the I-920 campaign by those opposed to repealing the tax.

We’ll conclude the way we did last year: It’s clear that lawmakers face continued pressure to fund education, just as they did a decade ago when they adopted the estate tax. Yet they should remember that the best tax strategies are those that stimulate economic growth and investment.