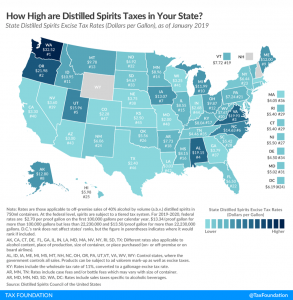 It’s not a surprise that Washington has the nation’s highest liquor taxes, but the Tax Foundation analysis is nonetheless surprising. The $10.54 per gallon gap between No. 1 Washington and No. 2 Oregon is substantial. TF reports,

Data for this map comes from the Distilled Spirits Council of the United States. To allow for comparability across states, the Council uses a methodology that calculates implied excise tax rates in those states with government monopoly sales.

The liquor regime in Washington was transformed by Initiative 1183, passed in 2011. And, as the Department of Revenue  points out, there are two types of liquor taxes here. The Tax Foundation notes the complexity:

Like many excise taxes, the treatment of spirits varies widely across the states. Spirits excise rates may include a wholesale tax rate converted to a gallonage excise tax rate; case and/or bottle fees, which can vary based on size of container; retail and distributor license fees, converted into a gallonage excise tax rate; as well as additional sales taxes. (Note that this measure does not include a state’s general sales tax, only taxes in excess of the general sales tax rate.) Rates may also differ within states according to alcohol content, place of production, or place purchased (such as on- or off-premise or onboard airlines).

It looks complicated, though we trust the Distilled Spirits Council gets the comparative data right.