The News Tribune editorial board weighs on on the search for alternatives and supplements to the state gas tax. The editorial gives a qualified endorsement of a pay-per-mile tax.

Washington transportation policy makers are faced with a “dangerous curve ahead” signpost due to the state’s overreliance on a gas tax. Unless an alternate route is mapped out, we’re headed toward a fiscal cliff in the next few decades.

Shifting to a pay-per-mile formula is the best idea on the table right now. A trial project involving 2,000 volunteers who tracked their mileage for a year was recently completed; the state Transportation Commission will review a report and may vote on a proposal in December; and legislators could be debating bills in Olympia next year.

We’ve written previously of the declining productivity of the gas tax for funding highway infrastructure and of the state’s fourth-highest-in-the-nation gas tax. 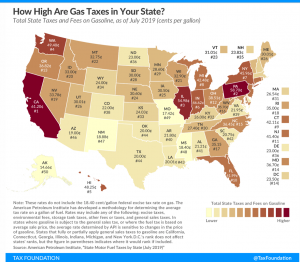 The editorial emphasizes the importance of making sure the money is spent on roads.

At the same time, however, they need to study changes to Washington law to ensure the revenue is spent on traditional transportation infrastructure, not diverted to the state general fund or to legislators’ pet projects.

Specifically, that will require a close look at the 18th Amendment to the Washington Constitution.

The amendment specifies that gas tax revenues are spent on highway purposes. And, the editorial says, that’s how it should be for the mileage tax.

The problem with the 18th Amendment is that its language centers on collecting tax “on the sale, distribution or use of motor vehicle fuel.” Ratified in 1944 when the internal-combustion engine was king, it didn’t anticipate a switch to a mile-based tax or other non-petroleum revenue source.

State lawmakers, therefore, shouldn’t mess around with a mileage tax unless they have a parallel discussion about preserving the original intent of the gas tax.

Washington clearly needs a more reliable way to pay for transportation in the 21st century. But as long as there are highways — whether filled with gas or electric cars, driverless vehicles or cars piloted by brainwaves — we’ll also need a reliable stream of money dedicated to highway purposes.

An issue to watch in the 2020 legislative session.