Several articles that appeared in the morning inbox shared a theme, though they came from very disparate sources. They all touched on the growing divide between prosperous metro areas and left-behind rural and small town economies. That split was one we wrote about, albeit more generally, in our foundation report.

With its strong base in trade, transportation, manufacturing, technology, health care and financial services, the Seattle metro area continues to drive the state economy. This can also be seen in the region’s high per-capita personal income (PCPI), which is now 45 percent higher than the national average. Outside Seattle, the balance of the state roughly mirrors the U.S. average. This divergence in income clearly demonstrates the need for policies designed to create new and greater opportunities for all Washingtonians, regardless of where they live.

Writing in The Daily Yonder, Bill Bishop reports on the markedly different employment patterns in the nation’s urban and rural counties.

Nearly half of the nation’s rural counties have lost jobs over the last four years, according to figures provided by the Bureau of Labor Statistics.

The U.S. has been adding jobs since the beginning of President Obama’s second term. In all, there were 8.2 million more jobs in 2015 than four years earlier.

The map below shows the patterns. 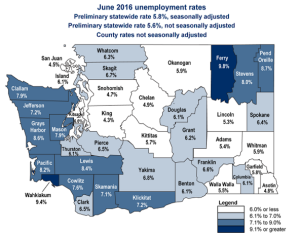 Conservative counties are getting redder, while King trends ever more blue…

The head of the state GOP, Susan Hutchison, has been declaring to anyone who will listen that we’re actually not a blue state, but a swing state. She has said that Donald Trump is exciting new voters on the right even as he may be turning off liberals, who live in what she calls a “bubble of left-wing propaganda.”

She’s got a point, according to these election results. I don’t know if that makes us a swing state so much as two states. Two bubbles, even. One redder, the other bluer, growing ever distant in their respective views on the world.

Bill Bishop, in another Daily Yonder piece, rounds up news showing that the split is growing across the country. Here’s one example, more at the link.

Pew Research finds an increasingly geographic split in the nation’s politics. The big cities are growing more Democratic, while the rest of the country is becoming more Republican.

This is an old theme for Yonder readers, but Pew has some good charts, facts and figures. For example, in 2012, in the race between Barack Obama and Mitt Romney, Democrats won 61 percent of the vote in the 100 most populous counties. Up from 51.3 percent in 1976.

Reams have been written about this pattern over the years (see here and here, for example). Bishop’s book, The Big Sort, was written in 2008 and remains a solid reference work on the nation’s changing political and economic geography.

We’ll leave the politics to others.

But we remain concerned about the economic divisions within our state. Shared prosperity is at the heart of our roadmap for expanding Washington’s culture of opportunity to all parts of the state. Perhaps once that goal is achieved, we can again recover common ground and break down other barriers as well.