Washington generally does well on The Volcker Alliance’s budget report card, as shown below. 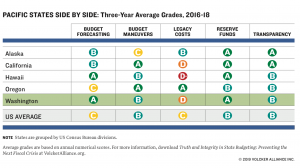 The report card is released in The Volcker Alliances three-year examination of Truth and Integrity in State Budgeting, described this way:

The 2018 edition of the Volcker Alliance’s report, Truth and Integrity in State Budgeting: Preventing the Next Fiscal Crisis, is the nonprofit’s second annual study of US state budgeting practices. Covering fiscal 2016 through 2018, the study assesses and grades all fifty states in five critical budgeting areas: budget forecasting, budget maneuvers, legacy costs, reserve funds, and budget transparency. States received grades of A to D-minus, the lowest possible mark, for each category. Each grade reflects the state’s three-year average for each critical budgeting area. The report also provides insights into the best practices for state budgeting.

WASHINGTON EARNED A averages in budget forecasting and reserve funds for fiscal 2016 through 2018. At the same time, it received the second-lowest mark possible for its handling of legacy costs, including public worker pensions and other post-employment benefits (OPEB), such as health care.

reflected Washington’s disclosure of multiyear revenue and expenditure estimates. The state Economic and Revenue Forecast Council, which includes members of the legislative and executive branches, as well as the independently elected state treasurer, releases a quarterly budget forecast that currently includes expenditure projections through 2021.

The Alliance dinged the state for “legacy costs.”

Although Washington’s public worker pension funded ratio stood at 89.6 percent as of 2017, 20 percentage points above the total for states, it averaged only a D in legacy costs because it failed to make full actuarially determined contributions for either pensions or OPEB.

The report does not include any of the 2019 budget activities, some of which weaken sustainability.

For those interested in budget best practices the report provides a wealth of good information.