The latest monthly update from the Economic and Revenue Forecast Council continues to show tax collections coming in well above the official June forecast. This is the third consecutive monthly beating expectations. (See August and July.) The ERFC reports,

As the ERFC writes, the $600 per week helped household maintain consumption during the early months of the pandemic, a point explored in this post commenting on a Washington Research Council analysis. The ERFC graph below shows the sharp dip in collections and an uptick beginning to approach trend. (We’re tempted to say that looks like a “V-shape” comeback. But this isn’t over yet.)

The ERFC report, as always, contains a lot of useful information. From the commentary on the Washington economy:

We have three months of new Washington employment data since the June forecast was released. Employment continued to rise in June, July, and August following the historic decline in March and April. Total nonfarm payroll employment rose 190,800 (seasonally adjusted) in the last three months which was 81,800 more than expected in the June forecast. As of August, the state’s economy has recovered nearly half the jobs lost in March and April (see figure). Private services-providing sectors added 161,700 jobs in the three-month period. The manufacturing sector lost 3,700 jobs which was more than accounted for by the loss of 6,500 aerospace jobs. Construction employment increased by 10,800. Federal government employment increased by 10,000 however 5,900 of those were temporary Census jobs. State and local government payrolls expanded by 11,900 jobs in June, July, and August.

Washington’s unemployment rate declined to 8.5% in August from 10.2% in July. The August rate is down significantly from the 16.3% rate reached in April which was an all-time high in the series that dates back to 1976. 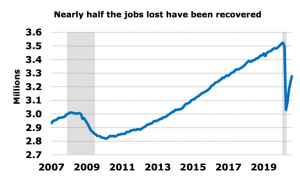 The ERFC’s preliminary economic forecast suggested a stronger-than-anticipated economic recovery in our state. The collections reports are some of the evidence. The next official revenue forecast will be released September 23.