As we’ve previously written, that’s how the system is supposed to work under fiscal federalism.

As the WRC wrote in the study referenced,

A fundamental principle of what’s known as “fiscal federalism” is that redistributive tax policies are best enacted on a national basis, one of the justifications for the highly progressive federal income tax. Federal taxes offset regressive state and local tax structures without providing incentives for taxpayers to relocate to reduce their tax liability. Thus, our third point:

3. All state and local tax structures are regressive. But when the steeply progressive federal income tax system is considered, the overall federal-state- local tax burden is progressive in Washngton and every other state, and the differences among the states represent smaller proportions of households’ overall tax burdens.

Much more at the link. We’ll lift just one of the several charts accompanying the analysis. 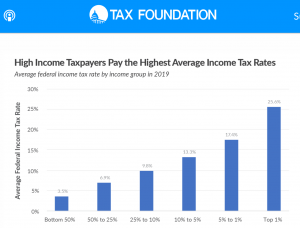 While we’re on the subject, an economist colleague passed along a recent academic report examining support for income redistribution, an  oft-stated goal of those supporting progressive tax reform. It’s, well, academic, with lots of equations, models, literature review, and hypothesizing. So, not an easy read, though the conclusions are clear and, for many,  counterintuitive.

Here’s the paper, with the catchy title, “Why Are Relatively Poor People Not More Supportive of Redistribution? Evidence from a Randomized Survey Experiment across Ten Countries.” Economists Christopher Hoy and Franziska Mager conducted a sweeping analysis, described this way in the abstract.

We test a key assumption underlying seminal theories about preferences for redistribution, which is that relatively poor people should be the most in favor of redistribution. We conduct a randomized survey experiment with over 30,000 participants across 10 countries, half of whom are informed of their position in the national income distribution. Contrary to prevailing wisdom, people who are told they are relatively poorer than they thought are less concerned about inequality and are not more supportive of redistribution. This finding is consistent with people using their own living standard as a “benchmark” for what they consider acceptable for others.

A couple of more thoughts from their conclusion:

A lot more in the analysis, of course, and much of it dense and, ultimately, inconclusive as to why support for redistribution among less wealthy people does not grow as information about their “relative poverty” becomes more clear.

It could be, at least in the U.S. and at least partially, that many lower-income people already pay few taxes and benefit from federal and state income support programs. In other words, the system is working.