Washington metros again show up among the nation’s most economically vibrant cities. A new report, Most Dynamic Metropolitans, includes three Washington cities among the nation’s top 30: Seattle-Tacoma-Bellevue (No. 10), Wenatchee (No. 16), and Mount Vernon-Anacortes (No. 21).  An impressive showing! 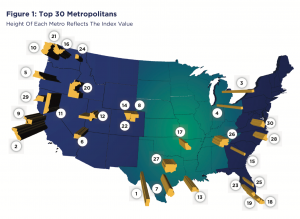 The report’s authors, Ross DeVol and Jonas Crews, describe their work in a New Geography post.

The study demonstrates that a knowledge-based economy spurs economic growth in metropolises across the United States. Metro areas with knowledge-based economies ranked higher than cities that have yet to make much-needed investments in technology, education, entrepreneurship and commercialization…

Each metropolitan area is ranked and reviewed on performance-based metrics, such as job growth, income gains, and the proportion of total jobs at young firms – a key measure of entrepreneurial performance. This is the first time that such research has been undertaken in this scope.

Each top 30 metro gets a two-page discussion. We’ll give you the first paragraphs of each Washington city.

Of the urban Puget Sound region, the report says,

The surge in economic growth in the Seattle-Tacoma-Bellevue, Washington metro area continues unabated as it is among the most innovative places in the world. Seattle is 10th overall and fourth within the large metro category in Most Dynamic Metropolitans. The University of Washington was named the most innovative public university in the world based upon its ability to “advance science, invent new technologies and help drive the global economy.”129 Seattle’s performance places it in the top-tier across the metrics in our analysis, but its best growth measure was fifth in average annual pay over the 2013-2017 timeframe. Seattle’s many attributes place it in a unique position: 11 Fortune 500 firms, top tech employers, a world-renowned public research university, an emerging biotech cluster, outstanding small-firm growth, a hub of international trade and a tourism cluster. Seattle’s biggest challenge in the future might be a vocal minority that dwells on the income and outcome disparities that are real, but chooses a narrative that exaggerates their severity.

Wenatchee, Washington, and preceding Gainesville [GA] are two sides of the same coin. In a world where many of the strongest metropolitan economies are increasingly dependent on high-tech manufacturing and services, these two metropolitans are thriving on agriculture and food processing. While Gainesville has poultry, Wenatchee’s economy is centered on fruit.

The Wenatchee metro was not a standout in any single category, but it performed well in all of them. The metro’s lowest ranking among short-term economic growth measures was 43rd, and its lowest among medium-term growth measures was 75th. Wenatchee’s young firm employment ratio was more than 1.5 standard deviations above the national metro average, impressive for an economy so dependent on the mature agriculture industry.

Of No. 21 Mount Vernon-Anacortes,

The Mount Vernon-Anacortes, Washington metro (MVA) lies on fertile soil along the Puget Sound, and borders the also-successful Seattle-Tacoma-Bellevue and Wenatchee metros. Like similarly sized Wenatchee, MVA has a strong agricultural base anchored in non-traditional crops. Yet, due to its access to the Pacific Ocean, MVA also has some unique economic capabilities ranging from shipbuilding to aquaculture to refinement of shipped-in oil.

While MVA performed well in each metric, including the 12th-best medium-term GDP growth among all metros, it was a particular standout in wage growth. MVA was eighth overall in medium-term average annual pay growth, and seventh overall in short-term growth. This performance may have been partially influenced by a $1.53 jump in Washington’s minimum wage from 2016 to 2017,274 but the jump certainly does not explain all of the growth. Lesser wage growth performances in other Washington metros serve as evidence.

There’s a lot of good information and discussion. In the New Geography post, one of the authors sums up policy implications:

“Technology sectors are under-represented, and too little emphasis is placed on supporting entrepreneurs in Heartland metropolitan areas,” DeVol continued. “Investors must be willing to support early-stage firms, and more universities need to embrace commercialization as a critical part of their mission and educational attainment, particularly in science, technology, engineering and mathematics (STEM) for economic progress in the Heartland and throughout the nation.”

Makes sense. We recommend spending some time with the Most Dynamic Metropolitans.