We’re driving less during the pandemic. And that means gas tax revenues to support transportation infrastructure are falling. The Spokesman-Review reports,

The department hasn’t quite measured the full scale of the fallout, Gribner emphasized, but as of late last week, his back-of-the-envelope calculations indicated the department will be $100 million short on revenue – per month.

A possible 40% decline is in the neighborhood the Tax Foundation predicted at the end of March.

According to INRIX, a traffic data analytics company, compared to the week of February 22, just before the pandemic was officially called, personal travel nationwide for the week of March 23 had decreased by 44 percent. Even compared to the week before the March 23 week, there had been a 20 percent decrease. Trucking is also down, but not to the same degree, as businesses (especially retail stores and pharmacies) still need inventory. Long haul trucking is down 3 percent whereas local trucking operations are down 14 percent. The overall decline in road traffic is 38 percent. Such a decline will lead to a dramatic decline in gas tax revenue.

TF acknowledges precise estimates are impossible, because – among other factors – no one knows how long the social distancing restrictions will last. Federal funding, problematic even in good times, is particularly important now, TF writes. while acknowledging the economic balancing that must be considered.

The federal government’s funding mechanism for the Highway Trust Fund, the Fixing America’s Surface Transportation (FAST) Act, expires in September, and lawmakers must decide what to do about financing the fund going forward. If spending continues at current levels, with the current tax rate, the Congressional Research Service projects a $74.5 billion deficit over five years. The only options to relieve this deficit are to reduce spending or increase gas taxes (or a combination of both).

There may be room to increase the federal tax rate as it has not changed since 1993 and is not indexed to inflation. This has eroded the value of the tax over the last 27 years; to maintain constant value, an 18.4-cent per gallon tax in 1993 would have to be 26.1 cents today. In addition, increased fuel efficiency of newer cars has lowered the tax per mile for many drivers. Yet a tax increase on motor fuel may be ill-advised during a pandemic, because it is paramount that inventory for retail stores, pharmacies, and hospitals can move around the country.

The Washington State Department of Transportation reports that Washington currently has the nation’s fourth highest gas tax, suggesting our particular susceptibility to a downturn. 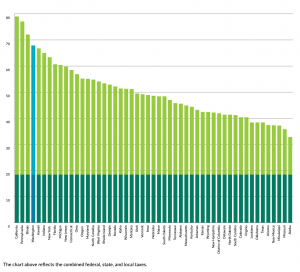 While the state is taking steps to cut spending, “these measures will not be enough to make up for the anticipated revenue shortfall, and we expect our Legislature will have to make additional reductions when it returns to session,” wrote Transportation Secretary Roger Millar in a letter to the Washington congressional delegation.

“Federal assistance is urgently needed in order to prevent major disruptions to our ability to operate and maintain our transportation system during this unprecedented emergency,” he said.

The revenue decline is not limited to gas taxes.

Over the past six weeks, since the coronavirus outbreak all but shut down the state, traffic has been reduced an average of 45%, he said. Transit and ferry ridership have dropped 75%, and use of toll roads is down significantly

Even before I-976 passed and the pandemic kept Washingtonians off the roads, the search was on for other ways to fund transportation infrastructure. We imagine that search will intensify in the coming months.