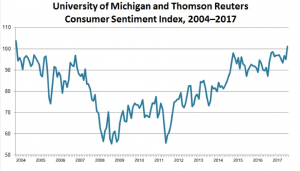 Initially, this seems odd and contradictory.

This was well above the consensus estimate, which was for little change in the measure for the month. Richard Curtin, the Survey of Consumers Chief Economist, writes, “The October gain was broadly shared, occurring among all age and income subgroups and across all partisan viewpoints. The data indicate a robust outlook for consumer spending that extends the current expansion to at least mid-2018…

According to the two latest surveys by Chief Executive, September and October’s ratings for expected business conditions 12 months from now have slumped to their lowest level since November 2016. In September, respondents rated their level of optimism for the year ahead at 6.75 out of 10. In October, it was slightly higher, at 6.85. This was a sharp decline from the period of May to August, when confidence ranged from just 7.03 to 7.01, with little change.

But it turns out the CEOs feel pretty optimistic about business prospects.

But even as many of the nation’s chief executives wait on presidential promises to materialize, three-quarters of those surveyed nevertheless say they are anticipating a boost in their firm’s revenue (78%) and profits (73%), and half plan to increase the number of employees (51%) along with capital expenditures (52%).

The Chief Executive survey looks at CEO confidence by sector and size.

While transportation started the year as the least confident of sectors, with a forward-looking index of 5.40, it has since clocked in an upswing of 34%, making it the second most confident industry this October, tied at 7.25 with Energy…

On the other end of the spectrum, health care flip-flopped from its number one spot as the most confident sector in January, with a rating of 8.25, to the bottom of the pack in October (5.82)—a drop of 29% over ten months. It is important to note, however, that in January the sector had just come off the heels of a 6.64 rating in December 2016 and, as data shows, immediately returned to a somewhat similar level in February with 6.13.

And there’s little difference in the views of small and large firm CEOs.

When broken down by company size, the confidence of small (6.88), mid (6.70) and large company (6.61) CEOs in business conditions one year from now is relatively in line with the overall index of 6.85 for the month.

The drop in CEO confidence is to a degree attributed to recognition that their expectations for pro-growth public policies from Congress now appear stalled or unrealizable.

CEOs we talked to during the September survey said that while they remained highly confident in their market opportunities and the economy in general, political turmoil here and on the world scene was making it difficult to stand tall in that belief.

In October, factors such as uncertainty over the outcome of tax reform, particularly with respect to corporate rates and the foreign profit repatriation plan, as well as the Fed’s upcoming interest rate strategy and the wavering future of the health care bill appear to have further clouded earlier optimism.

The consumer and CEO surveys show a certain convergence, then, as both groups remain somewhat optimistic about the economy while accepting that it could be better. As the economist for the University of Michigan survey, Richard Curtin, writes,

While the early October surge indicates greater optimism about the future course of the economy, it also reflects an unmistakable sense among consumers that economic prospects are now about as good as could be expected. This “as good as it gets” outlook is supported by a moderation in the expected pace of growth in both personal finances and the overall economy, accompanied by a growing sense that, even with this moderation, it would still mean the continuation of good economic times.

Optimistic, but not euphoric. Probably an apt assessment.