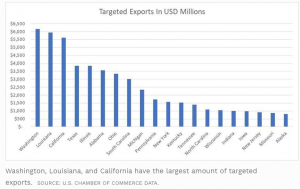 Monday’s presidential announcement of new tariffs on imports from China  has produced new concerns about the economic impacts of an escalating trade war. In Forbes magazine, financial consultant Mayra Rodriguez Valladares reviews the implications, drawing on several recent analyses. The graph above is taken from her column.

The U.S. Chamber of Commerce lists thirteen states as being exposed to the most ‘extremely significant damage’ due to retaliatory tariffs against US exports by Canada, China, Europe, and Mexico. They are Alabama, Alaska, Idaho, Iowa, Louisiana, Michigan, Mississippi, Ohio, Oregon, South Carolina, South Dakota, and Washington.  However, there are seven other states that are close enough in the size of their targeted exports that I included them in the adjacent graph. Washington, Louisiana, and California have the largest targeted export markets.

On Monday the White House announced it had “directed the United States Trade Representative (USTR) to proceed with placing additional tariffs on roughly $200 billion of imports from China”.

While popular rhetoric suggests that tariffs are “slapped” on a foreign country, tariffs are of course taxes paid by Americans. It’s U.S. consumers, not foreigners, who are stuck with the bill – in this case, a multi-billion dollar bill that we will all have to pay.

Following Monday’s action, the Tax  Foundation updated its analysis of the economic impacts. The national impact is immense.

According to the Tax Foundation model, the tariffs planned and enacted so far by the Trump administration would reduce long-run GDP by 0.12 percent ($30 billion) and wages by 0.08 percent and eliminate 94,303 full-time equivalent jobs. If the Trump administration acts on threats to place new tariffs on automobiles and parts and additional tariffs on products from China, GDP would fall by an additional 0.38 percent ($94 billion), resulting in 0.24 percent lower wages and 292,648 fewer full-time equivalent jobs.

Other countries have also announced intentions to enact tariffs on U.S. exports. If these tariffs are fully enacted, we estimate that U.S. GDP would fall another 0.09 percent ($23.5 billion) and cost an additional 72,864 full-time equivalent jobs.

If all tariffs announced thus far were fully enacted, U.S. GDP would fall by 0.59 percent ($148 billion) in the long run, effectively offsetting one-third of the long-run impact of the Tax Cuts and Jobs Act. Wages would fall by 0.38 percent and employment would fall by 459,816.

Northwest cherries were an early trade war victim, with losses estimated at $86 million in China, the only country to impose a tariff on cherries.

Though the dollar impact of the tariffs are estimates, agricultural exports are suffering losses that will top $4 billion this year and are projected to increase next year…

While the USDA says $12 billion will be forthcoming in relief to commodity growers damaged by the tariffs, leaders in every sector say it won’t be enough and is not intended to make anyone whole.

The ultimate critical resolution, they say, is for tariffs to go away through new trade agreements.

…the president’s new round of tariffs drew immediate and widespread condemnation from the American business community, which has steadily opposed such duties, even as many executives say they share the administration’s complaints about Chinese trade practices.

“We are extremely discouraged by the decision to move forward on tariffs on millions of products American consumers buy every day,” said Hun Quach, vice president of international trade for the Retail Industry Leaders Association, a trade group representing large chains like Walmart and Best Buy .

The Valladares column in Forbes points out an additional risk to the financial community from the tariffs.

If even 1% of Americans in global trade supported employment lost their jobs due to the escalating trade conflict with China or any of the other countries and regions previously mentioned that would be 262,352 unemployed people. If that number were to rise to 5%, the unemployed would then be 1.3 million.  Any bank risk manager knows from personal experience that it does not take long for unemployed people to start making late payments and for defaults to start rising quickly. This is the time to start reviewing all credit portfolios carefully and hope for the best, but prepare for the worst.