A new report from the International Trade Administration, a bureau in the U.S. Department of Commerce, find the Seattle-Tacoma-Bellevue metro is America’s 4th largest export market. The statistics are compelling (click here to the Seattle metro page, click the graphic to expand): 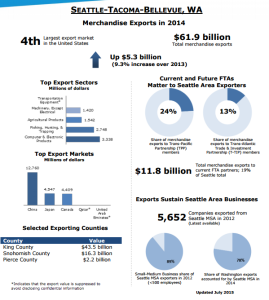 From the ITA write-up:

In 2012 (latest data available), 5,652 companies exported goods from the Seattle metropolitan area. Of these, 5,039 were small- or medium-sized exporters (SMEs) with fewer than 500 employees.

As we wrote last year,

Washington’s economy is highly dependent on global trade. The state ranks second in the nation in exports per capita. According to the Washington Council on International Trade, 40 percent of the jobs in the state are related to trade in some way.

Given its many trade advantages, the state is well-positioned to continue to be a leader in international trade for years to come. A $7 billion investment in to preserve and maintain state road and bridge networks and improve key economic corridors would generate $42 billion in economic benefits.

These advantages include deep-water ports that are well-equipped to handle commodities and efficient container handling, a major international air traffic hub for passengers and cargo, smaller regional airports, and geographic proximity to key U.S. trading markets, including both Canada and the Pacific Rim. Washington’s many existing trade-dependent jobs, as well as the ones that can be created in the future, depend on an efficient, intermodal transportation system sending goods to and from our state.

Yet more evidence in support of the legislature’s landmark $16 billion transportation package.