As expected, this morning’s report of third quarter economic growth showed a strong recovery over the summer and early fall.

Real gross domestic product (GDP) increased at an annual rate of 33.1 percent in the third quarter of 2020 (table 1), according to the “advance” estimate released by the Bureau of Economic Analysis. In the second quarter, real GDP decreased 31.4 percent.

This BEA graph makes clear the swing in the last six months. (Much more detail in the report.) 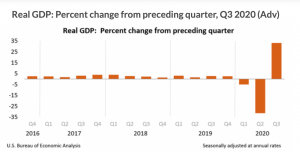 The economy grew at a record pace in the third quarter—increasing 7.4% over the prior quarter and at a 33.1% annual rate—recovering about two-thirds of the ground it lost earlier in the coronavirus pandemic.

Gross domestic product—the value of all goods and services produced across the economy—jumped following a record decline from earlier in the pandemic when the virus and related shutdowns disrupted business activity across the country. That puts the economy about 3.5% smaller than at the end of last year, adjusted for inflation and seasonal fluctuations.

The third-quarter increase followed a 9% quarter-to-quarter decline in the second quarter, or a 31.4% annualized drop.

Yesterday, we wrote that the anticipated report was already an anticlimax. Most of the analysis today points to slower growth in the fourth quarter. Bloomberg reports,

While the report makes clear that the economy has found a solid footing for now, analysts caution that growth will be much more modest and choppy in months to come, especially as the spread of the virus gathers pace again and lawmakers remain in an extended deadlock over a new stimulus package.

Moreover, there are still nearly 11 million fewer workers on payrolls than there were before the pandemic hit, and analysts say a full recovery in GDP is at least several quarters away.

“To the extent that reopening drove the strength in Q3, not only have we already reopened but we may partially close a few things,” said Michael Feroli, chief U.S. economist at JPMorgan Chase & Co. “That’s really the elephant in the room when it comes to thinking about Q4.”

“Much of the third-quarter strength was concentrated in the beginning of the period; a significant slowdown has emerged since then. Bloomberg Economics expects a weak patch through the first quarter — driven by the impact of elevated COVID-19 transmission on behavior, and lapsed fiscal aid — and a return to the pre-pandemic level of GDP in the fourth quarter of 2021,” said Bloomberg economist Andrew Husby.

The WSJ story linked above says,

“This is the quarter that captures the reopening of the economy,” said Tim Quinlan, an economist at Wells Fargo Securities, adding that “it’s a far cry from signaling the all-clear that the economy’s in great shape here.”

U.S. GDP is normally reported at an annual rate, or as if the quarter’s pace of growth continued for a full year. But the pandemic triggered extreme swings in output—a severe drop followed by a quick rebound—making the annualized numbers misleading. No one expects second- or third-quarter numbers to continue for a full year.

The Wall Street Journal’s October survey of economists found that more than half of respondents don’t expect GDP will return to its pre-pandemic level until next year and that the economy will contract 3.6% this year, measured from the fourth quarter of 2019.

Adding to the economic concerns for the coming months are reports of a new round of lockdowns in Europe and the U.S.

A new wave of lockdowns and business closings swept across France, Germany and other places in Europe on Wednesday as surging coronavirus infections there and in the U.S. wipe out months of progress against the scourge on two continents.

Still, the Q3 numbers must be regarded as good news, if fleeting.