Heading into the 2019 legislative session, we’re apt to be hearing more (again) about the need for progressive tax reform. Putting a little perspective on the issue, Brian Riedl, a senior fellow at the Manhattan Institute, reminds us of just how progressive the U.S. federal income tax is. In a commentary, Riedl writes,

The first link is to a 2013 Washington Post story, which features the following graph. 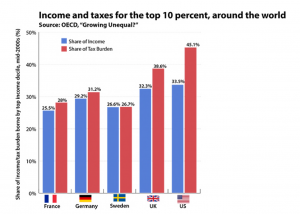 Our top 10 percent gets a bigger slice to start, but it also pays a much higher share of the tax burden than the upper classes in other countries do. In Sweden, generally considered the most economically egalitarian country on the planet, the rich pay taxes that are more or less exactly their share of income. These numbers are a little dated, coming as they do from a 2008 OECD report, but the point stands. [Note: This was written before the recent federal tax reform, but again, as a 2018 analysis demonstrates, the point stands.]

The most redistributionist countries on the planet tend not to be those with really progressive taxes. Instead, they’re the countries that tax regressively but then direct that money overwhelmingly to poor residents.

Why this is important is laid out in a Washington Research Council report released earlier this year. The WRC writes,

Simply, two facts should be kept in mind.

This report, of course, will not settle the debate about tax fairness in Washington. Those who prefer a highly progressive tax structure may examine the data, accept that Washington is perhaps not the“most regressive” state in the nation, andstill contend that Washington should adopt a more progressive tax system. States without an income tax typically rank as more regressive than those that have one. Others may examine the data and conclude that, within the context of fiscal federalism and the expressed preferences of Washington voters, the state’stax structure is satisfactory.

With respect the observation made by Matthews that “redistributionist” policies are better handled on the spending side than through taxes, we previously wrote that Washington looks pretty good on that score. We cited a Governing magazine article that stated,

In 2014, the nonprofit Federal Funds Information for States (FFIS) warned that fairness is just one feature of a good tax system. Others are adequacy, simplicity, transparency and ease of administration. For example, FFIS pointed out that while Washington ranks poorly in tax fairness, it puts more of its revenues toward programs that support low-income families.

“Sometimes the policies that satisfy one feature run contrary to another, making it important that a system be evaluated in its entirety rather than in a piecemeal fashion,” the group said. (Emphasis added.)