State and local governments have asked for $1 trillion in additional relief from Congress, with Gov. Inslee and legislative leaders joining in the appeal. Friday’s $3 trillion pandemic relief package includes the $1 trillion, but it’s highly unlikely that the House’s opening bid will be matched by the Senate.

The New York Times called the bill “a messaging document,” and leads with this DOA prediction.

A divided House narrowly passed a $3 trillion pandemic relief package Friday to send aid to struggling state and local governments and another round of direct $1,200 payments to taxpayers, advancing a proposal with no chance of becoming law over near-unanimous Republican opposition.

The Associated Press is similarly dismissive of the bill’s chances.

Friday’s 208-199 vote, with all but one Republican opposed, advances what boils down to a campaign-season display of Democratic economic and health-care priorities. It has no chance of becoming law as written, but will likely spark difficult negotiations with the White House and Senate Republicans. Any product would probably be the last major COVID-19 response bill before November’s presidential and congressional elections.

The enormous Democratic measure would cost more than the prior four coronavirus bills combined. It would deliver almost $1 trillion for state and local governments, another round of $1,200 direct payments to individuals and help for the unemployed, renters and homeowners, college debt holders and the struggling Postal Service.

It’s unclear how and how quickly the Senate will move to pass a counter proposal. Saturday, we wrote that the state’s latest monthly revenue collections report – the first to reflect major effects of the lockdown – suggests a significant hit to state tax receipts. Washington Research Council economist Kriss Sjoblom comments on the collections report. Not sure what to make of this:

Sjoblom includes this chart from the ERFC report. 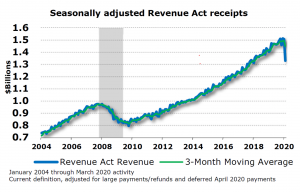 There’s a reason state and local officials are looking for additional federal assistance.