We’re accustomed to hearing about our state’s status as having the nation’s most trade-driven economy. So, it was a surprise to read the U.S. News headline: Southern States Among Hardest Hit by China Tariffs. But the surprise gave way to the usual confirmation that, yes, Washington is among the states at most risk from a trade war with China.

The report by Andrew Soergel measures the effects of the China tariffs on several dimensions, recognizing that they are applied to specific goods and that the share those goods represent of overall trade vary among the states.

For many states, agriculture and automotive vehicle exports are among the most commonly shipped products to China, but the Asian economy’s tariffs are poised to hit a wide array of industries. In Washington, for example, tariffs threaten an aluminum waste and scrap industry that saw nearly $50 million in product exported to China last year. In New Jersey, the duties stand in the way of certain types of U.S. paper supply companies that shipped more than $30 million in product to China in 2017.

But Alabama stands as the state with the greatest potential for business disruption as a result of Chinese tariffs targeting 333 individual U.S. export products valued at roughly $16 billion. Of the nearly $3.6 billion in commodities Alabama shipped to China last year, tariffs threaten to raise prices on more than $2.3 billion worth of exports.

According to the report, Washington has the fifth highest value of exports to China threatened by tariffs and ranks second for total trade with China. Here’s the snapshot. 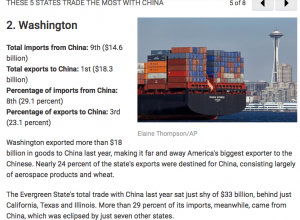 Acknowledging the risk, it’s good to see signs of progress as reported by the Wall Street Journal last Friday.

Chinese and U.S. negotiators are mapping out talks to try to end their trade standoff ahead of planned meetings between President Trump and Chinese leader Xi Jinping at multilateral summits in November, said officials in both nations…

The talks represent a clear move by Beijing to get relations with Washington back on track that were cordial early in the Trump presidency and involved coordination to rein in North Korea. Those relations have soured, especially after Mr. Trump’s initial tariffs on Chinese imports, which he said were designed to punish Beijing for alleged intellectual-property violations and technology theft. The resulting tit-for-tat of trade threats and retaliation has hit China’s currency and stock markets.

The trade conflict was the focus of discussion at the recent Association of Washington Business (AWB) 2018 Federal Summit. According to The Lens,

The event focused on Washington’s business community and its stake in international trade, taxes and other federal affairs. Featured speakers discussed the trade relationships between Canada, Mexico and the U.S., the status of tariffs and their effects on the Washington economy, as well as where Washington should focus its efforts to best benefit business owners both large and small.

Read the whole article to get a good sense of the concern. This speaker sums it up nicely.

Kristin Kershaw is the Director of Corporate Affairs for Domex Superfresh Growers and Kershaw Companies, a Yakima-based agrobusiness that is one of the largest suppliers of apples, pears and cherries all over the world…

“Asia is poised for some phenomenal consumption-driven growth, and we want to be there.

“When we start talking about trade …and barriers to trade and tariffs, what we are really saying is if we can’t resolve it…we really don’t want to participate – that we are going to sit out the largest explosion of middle-class growth and potential consumers the world has ever known.”

A swift resolution to the dispute will benefit all concerned.