Gov. Inslee today announced that 10 more counties would be eligible to move to Phase 2 as the state moves toward reopening the economy.

Under the plan, smaller counties can apply for a variance from the order which would allow them to open even more businesses than allowed statewide. Counties are now eligible to apply if they have less than 10 new cases per 100,000 residents over a 14-day span.

…As of Monday, 10 counties have already been approved to move into Phase 2. Twenty-two counties in the state are eligible in total. Combined, these counties represent 30% of the state. 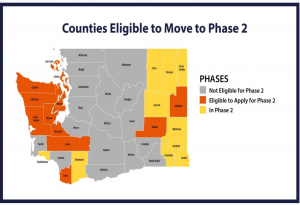 Under the second phase, restaurants can reopen with some in-store dining, retailers can proceed with some in-store purchases and pet groomers can being working again. Many professional and personal services — from barbershops, hairstylists and tattoo artists to attorneys, architects and IT professionals — can resume with safety protocols in place.

Inslee and state health officials have said most counties would move to the second phase on June 1, provided public-health metrics — like COVID-19 cases and data like hospital capacity — looked favorable.

The Association of Washington Business last Thursday reiterated its support for a faster reopening of manufacturing.

“We believe it’s time to restart Washington’s manufacturing economy, which is so important to the state’s economic health” said AWB President Kris Johnson. “As the state’s manufacturing association, we want to thank the governor for working with AWB in the development of the new guidelines for manufacturers. The health and safety of employees is paramount, and we believe these guidelines allow for the safe restart of manufacturing operations statewide, regardless of where they are located.”

The AWB press release points out,

Under the current rules, the state’s Phase 2 Manufacturing Facility COVID-19 Requirements allow manufacturers deemed “non-essential” to resume operations only in counties that have received a variance to move to Phase 2 of Washington’s “Safe Start” reopening plan. Manufacturers in the rest of the state must remain closed until all of Washington state moves to Phase 2 of the plan.

Read the full release. The case for a swift, safe restart is compelling.