The National Assessment of Educational Progress (NAEP) is the largest nationally representative and continuing assessment of what America’s students know and can do in various subject areas.

It’s a widely used measure. We use NAEP 4th Grade reading and 8th Grade math scores as part of scoring performance in the Achieve dimension (education) of our comprehensive Opportunity Score.

A report released Monday by the Urban Institute has adjusted the raw scores for each state to account for student demographics, including poverty, race, native language and the share of students in special education. The central idea behind the adjustments is that not all students arrive at school equally prepared, and states should not be judged as if students did.

Acknowledging that the results may generate some controversy, NYT reporter David Leonhardt writes,

The results do seem to offer another vote of confidence for rigorous, common standards — an idea that took off with the Common Core, but has since come under harsh political attack. Massachusetts helped pioneer the idea of such standardsnin 1993, with ambitious goals, clear assessments and increased school funding.

The NYT reports that Chingos will apply his demographic adjustments to the new NAEP results later this week.

We have no opinion on the validity of the adjustments, but find the effort to be an interesting addition to the information available on education performance among the states. And we pulled these two tables from the final report to give an idea of how they changed Washington’s ranking. 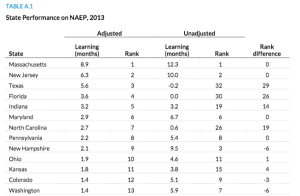 Applying the adjustment to the 2013 ranking causes Washington to drop 6 places in the ranking, from 7th to 13th. But on the trend analysis in scores from 2003 to 2013 the adjustment improves the state’s performance, lifting it from 13th to 10th. 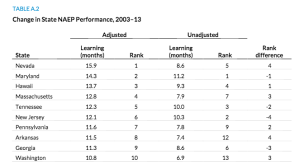 Stuff to think about.