More confirmation of the magnitude of the urban-rural employment divide comes in a Daily Yonder report by Bill Bishop.

The nation’s metro areas gained 11.4 million jobs since 2007, an increase of more than 9 percent. Rural America in the same time period lost 3.7 percent of its jobs.

The trend since 2007 has been for jobs to concentrate in the nation’s largest cities. Nearly nine out of 10 of the jobs created since 2007 appeared in the metro areas with a million or more people.

The map below illustrates the concentration. 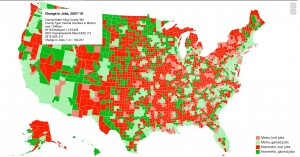 The counties in light green are metro areas that added jobs, many of them coastal or in Texas and the Southwest. King County added more than 182,000 jobs in the 2007-2018 period. As we wrote yesterday, the metro Seattle area is one of the nation’s most economically successful regions as determined by the Brookings Institution’s Metro Monitor.

With state tax revenues growing at an unprecedented rate – up $5.6 billion from the last budget – it’s sometimes easy to forget that not all of our state shares in the prosperity. Last month, we cited research published in Governing magazine illustrating the employment divide in Washington, with job growth concentrated in metro Seattle.

The most profound trend in the jobs figures is the increasing concentration of employment in the nation’s largest cities, those with more than a million people. Rural areas, metro areas with up to a million people and metros with fewer than 250,000 residents all lost shares of national employment to these mega-cities since 2007.

Many of our states rural counties are border counties, facing economic competition from across state lines. As lawmakers consider tax and regulatory policies in the final weeks of the session, we hope that keep in mind the challenges faced by the ag, manufacturing, service and retail employers in these rural communities.