So let’s take inspiration from New Jersey. Officials there recently announced a plan to increase state income taxes on those making over $1 million. While Washington lacks an income tax, other options are available to us. The governor’s office has crafted a 9% capital gains tax. Not long ago a group of state senators proposed a new law taxing compensation above $1 million.

There’s surely a lot to like about New Jersey. But tax policy wouldn’t be our first pick. The Tax Foundation ranks New Jersey dead last in the 2020 State Tax Business Climate Index. (That’s No. 50 over there next to New York.) 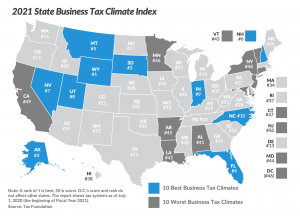 The states in the bottom 10 tend to have a number of afflictions in common: complex, nonneutral taxes with comparatively high rates. New Jersey, for example, is hampered by some of the highest property tax burdens in the country, has the second highest-rate corporate and individual income taxes in the country and a particularly aggressive treatment of international income, levies an inheritance tax, and maintains some of the nation’s worst-structured individual income taxes.

Add that new tax to the “nation’s worst-structured individual income tax” regime and it doesn’t get better.

A lot of people are noticing. And leaving the Garden State. The libertarian Cato Institute – we know, not everyone will love the source – writes,

New Jersey’s richest person, David Tepper, moved with his hedge fund business to Florida in 2016. That single move cost the state of New Jersey up to $100 million a year in lost income taxes. Yet, this year, New Jersey’s Democratic governor Phil Murphy hiked the top income tax rate from 8.97 to 10.75 percent. Murphy wanted to raise revenue, but the hike won’t do that if it prompts more of the rich to leave. The top 1 percent in New Jersey pay 37 percent of the state’s income taxes.

New Jersey, which is largely split between the New York and Philadelphia metropolitan areas, suffered the fourth net domestic migration loss, at nearly one million. New Jersey placed third in proportional decline, at 11.3%. 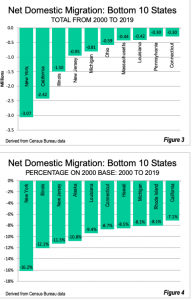 We agree. There are lessons to be learned from the way New Jersey policymakers have handled things. The main lesson being: Don’t do what they have done.