A new report from the Volcker Alliance gives Washington top marks for rainy day fund policies. Here’s how the report describes the grading process, with results shown in the map below.

This table contains assessments of states’ balances and policies for reserve funds for fiscal 2016 through 2018. States were graded on a scale of A to D-minus, the lowest possible, on whether they had policies (set by constitution, referendum, statute, or other formal rule) for the use and replenishment of rainy day funds; whether the rainy day fund balance (or contribution) was specifically tied to the historical trend of revenue volatility; and whether the rainy day fund or general fund balances were greater than zero on the first day of the fiscal year. 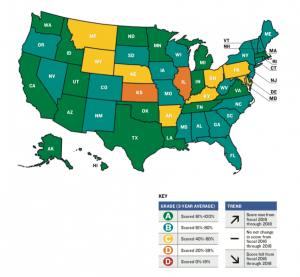 As the Washington Research Council reported earlier this year, Washington’s budget sustainability policies “work when followed.” But, the WRC found, the policies have been skirted in recent years. From the report’s “briefly.”

Washington’s four-year balanced budget requirement and constitutionally-protected rainy day fund promote state budget sustainability. The requirement that budgets balance over four years helps to limit the use of budget gimmicks and to prevent unsustainable bow wave spending. Reserves improve sustainability by providing a cushion for emergencies and limiting major program cuts during economic downturns. Because the rainy day fund is protected in the constitution, deposits are mandated, and withdrawals are limited.

Still, the Legislature plans to withdraw $2.044 billion from the rainy day fund in 2017–19. On top of that, it diverted $711 million before it could be deposited in the fund in order to avoid the limits on withdrawals, setting a bad precedent that Gov. Inslee has already attempted to repeat. By making these withdrawals, Washington is less prepared for a recession, should one occur in the next biennium.

For each, a best practice is identified. Although Washington receives several positive mentions in the report, the state didn’t get selected for a best practice example. One positive example from Washington is our state’s constitutional rainy day fund.

After drawing down surpluses, the most common approach for contributing to a rainy day fund is to tap a dedicated funding source. Sixteen states follow this procedure. Among the most typical sources are specific portions of general fund revenues or a defined portion of a single revenue source, such as severance tax collections. For instance, the Washington Constitution requires the state to deposit into the budget stabilization account at the end of each fis- cal year an amount equivalent to 1 percent of general fund revenues. As of 2019, the account contained the equivalent of 5 percent of general fund spending.

Washington follows another approach. In 2011, voters approved a measure to transfer an additional three-quarters of “extraordinary revenue growth” to the state’s rainy day fund at the end of a bien-nial budget cycle. Extraordinary in this case is defined as two-year revenue growth that is one-third higher than the average per- centage growth in revenues for the prior five budget terms. The exception is if employment growth in the preceding biennium is less than 1 percent in each fiscal year.

The first step in strengthening a state’s savings policy is to define rules governing when reserve funds can be spent, according to the Volcker report. Setting rules about usage and requiring some form of legislative approval “can help guard against frivolous use of taxpayer dollars while directing reserve funds toward the most pressing needs,” the report said.

Following the rules, it must be said, is equally important. Our frequently expressed concerns with the sustainability of this year’s adopted biennial budget remain elevated, in part because the Legislature managed to finesse policies put in place to strengthen sustainability.