There’s no question: As one of the nation’s fastest growing states, Washington has experienced increase demands for government services. That’s among the reasons for the substantial growth in the state budget in the last decade. A blog post from the Washington Research Council, however, demonstrates that there’s more to it than just meeting the demands of an increased population. 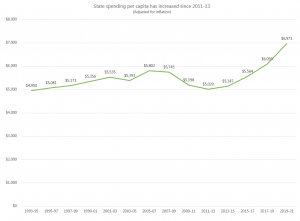 A Lens story on the budget situation notes the substantial increase in state spending in 2019–21. (Spending from funds subject to the outlook is up $9.016 billion, or 20.2 percent, over 2017–19.) According to Lens, Ways and Means Chair Rolfes “argued that the increased spending in the current budget reflects higher demand on public services due to a larger state population, with almost 200,000 new residents between 2017-2019.”

Yes, that’s “quite a bit” of expenditure growth. And it leads us to point to another WRC post commenting on potential legislative responses to the current budget challenge. (Washington State Wire reports on the post here.)

State Senator Joe Nguyen has set up a petition signed by three other legislators that calls on the Legislature to “REJECT an austerity approach in passing the FY2021 supplemental budget and the 2021–23 biennial budget.” Washington State Wire reports on this effort here.

First, let’s define our terms. Sen. Nguyen’s petition states, “An austerity approach is one that prioritizes budget cuts in order to avoid a deficit in times of economic downturn.” Economists use the term to describe both spending cuts and tax increases—both are policies used to reduce deficits. But Sen. Nguyen proposes that “upcoming budget decisions must be augmented with a strategy for implementing new progressive revenue streams.”

We recommend reading the post for full context. What we want to emphasize are is the analysis of how the state recovered from the Great Recession.

The petition continues, “The State Legislature in 2008 thought that short-term cuts could suffice to see Washington out of the financial crisis. But by 2013 we hadn’t recovered sufficiently . . . .”

Finally, the Legislature did not solely cut spending in response to the Great Recession. As we showed in a recent report, the Legislature actually increased spending in the 2008 supplemental budget—even after revenues began to decline. Of all the actions taken to address the Great Recession shortfalls, spending reductions made up 58 percent, federal stimulus funds made up 17 percent, tax increases made up 12 percent, and fund transfers made up 10 percent.

Another graph – not adjusted for population – from the WRC shows the state budget’s recovery after the Great Recession. 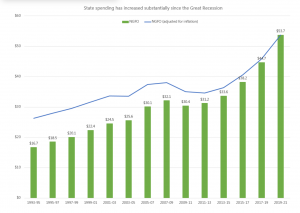 The balanced approach to handling the recession a decade-plus ago arguably contributed to a stronger economic recovery by avoiding tax increases that would have depressed investment and job creation.