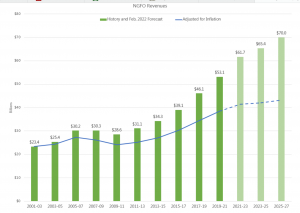 Yesterday, we highlighted the Washington Research Council’s chart showing the “enormous” growth in per capita state spending. Today, we similarly spotlight their the corresponding enormous growth in state revenues, shown in the chart above and analyzed in this WRC post.

Inflation is now a major problem. The WRC continues,

Under the current forecast, for the period of 2019–21 through 2023–25, NGFO revenues are estimated to be $11.336 billion higher than in the March 2021 forecast. Note, though, that that figure includes legislative changes made by the Legislature last year (including the capital gains tax). Removing those legislative changes from the revenue increase, the state now has $10.129 billion more than expected at the end of last session.

Before the revenue forecast, we estimated that the state had a NGFO surplus of $11.249 billion. With the estimated increases in revenue, I estimate that the surplus is now about $14 billion over the four-year outlook period. That does not include $1 billion in the Washington rescue plan transition account, $1.2 billion in the rainy day fund, or $1.3 billion in remaining federal COVID relief money.

With that as context (we recommend reading the brief WRC post), consider what lawmakers may do in the budget this week. So far, the theme is caution. The Everett Herald reports,

“It’s a substantial adjustment we’re going to have to make,” said Rep. Timm Ormsby, D-Spokane, chair of the House Appropriations Committee. “I am relieved with this forecast but not exuberant.”

“I would caution my caucus to be cautious,” she said.

“It’s raining money, and the Legislature should make it rain for the people of our state in the form of tax relief,” Sen. Lynda Wilson, R-Vancouver, who serves on the forecast council, said in a statement.

In Washington State Wire, Paul Queary writes of the expressions of caution from the Democratic budget chairs and adds,

Their Republican counterparts swiftly called for tax relief, an idea that has been floated on both sides of the aisle this year. The new increase isn’t quite enough to cover, for example, Sen. Mona Das’ proposal to lop a full percentage point off the state sales tax. But look for some election-year goodies when the spending plans come out next week.