Another No. 1 ranking for our state. The News Tribune reports:

Pat yourselves on the back, Washingtonians, you’ve got the strongest economy in the nation, according to a recent survey conducted by financial assistance website WalletHub.

In a survey of all 50 states plus Washington, D.C., the Evergreen State’s economy ranked No. 1 overall, surpassing Utah, Massachusetts, California and Colorado, respectively. 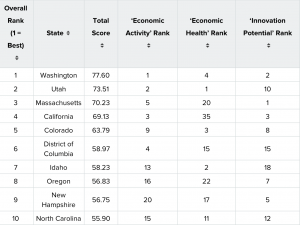 WalletHub compared the 50 states and the District of Columbia across three key dimensions: 1) Economic Activity, 2) Economic Health and 3) Innovation Potential.

Innovation potential included the share of jobs in high-tech industries, the share of STEM employment and the amount of entrepreneurial activity.

Washington’s tech sector, anchored by Amazon and Microsoft, propelled it the top of a number of rankings.

Right. The strong economy over the past several years boosted state tax revenues to record-setting levels. Still, lawmakers increased taxes by more than $1 billion to fund an 18.3 percent spending increase in the 2019-2021 budget.

Sheeler also notes that Washington tied with New Mexico for the fourth highest unemployment rate in the nation.

Let’s all hope that the strong economic performance continues, and expands opportunity to all corners of the state.