Washington ranks as the third best state in the nation for online job opportunities for college graduates, according to a new report from the Georgetown University Center on Education and the Workforce. From the press release:

Massachusetts, Delaware, and Washington State provide college graduates with the best odds of landing a job, according to a new report by the Georgetown University Center on Education and the Workforce.

Washington does remarkably well on a several critical measures, as the graphic below from the Washington State page in the executive summary shows. 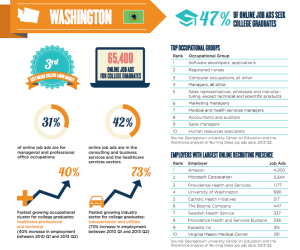 One reason for Washington’s strong performance:

Washington State ranks high due to the presence of tech giants like Microsoft Corp., the largest online retailer, Amazon.com Inc., and related services.

There’s a lot to mine in the report, which reinforces observations we have made.

By 2020, estimates are that 70 percent of jobs in Washington will require some form of postsecondary education (compared to 65 percent nationally).

Although Washington ranks 13th nationally in private sector job creation, 25,000 job openings in our state went unfilled for three months or more in 2013 because of a mismatch between the skills needed by employers and the qualifications of prospective employees. These openings were heavily concentrated in high-demand fields such as health care, information technology and engineering. Absent concerted action to address this skills gap, that number is expected to increase to 50,000 unfilled jobs by 2017.

The opportunities are here, now. We need to make certain that Washingtonians have the training and education they need to succeed in the 21st Century economy.