On a seasonally adjusted basis, preliminary estimates from the federal Bureau of Labor Statistics (BLS) indicate nonfarm employment in Washington rose by 1,000 in October 2020.1 BLS estimates the private sector gained 14,100 jobs during the month and the public sector lost 13,100 jobs.

On a not seasonally adjusted basis, estimates for October 2019 through October 2020 indicate a decrease in employment of 173,200 for the state. The private sector lost 132,000 jobs while the public sector lost an estimated 41,200 jobs over the year.

As the chart and sidebar below show, Washington remains well below pre-pandemic employment levels. 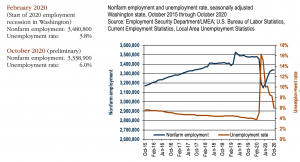 The department points out continued uncertainty.

“The preliminary read on October payroll employment shows a very small increase once more,” said Paul Turek, economist for the department. “Upward revisions to the data in recent months show a stronger recovery, but renewed restrictions on business operations in response to mounting virus risk put the recovery in jeopardy.”

More information in the report.

Calculated Risk comments that the published unemployment rates understate the situation. His analysis is worth reviewing.

Also, Seattle Times business columnist Paul Roberts reports that last week’s nation-leading spike in unemployment claims is less that it appeared. In his article on some Washingtonians being told they need to repay benefits, Roberts writes,

ESD officials said the problems are largely temporary and stem from federal regulations requiring the agency to move some recipients from a federal relief program to the regular state unemployment program.

The agency said many of the affected workers can restart suspended benefits and avoid repayment simply by filing a new claim with ESD. The ESD also temporarily paused sending notifications to claimants about the changes “due to the confusion some claimants had,” and it has clarified instructions on the ESD website, spokesperson Nick Demerice said Monday.

The agency also acknowledged that the state’s recent spike in jobless claims— the biggest of any U.S. state, as reported last week — was actually due to thousands of workers filing those new claims.