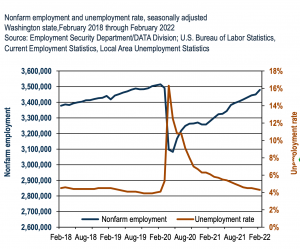 As the economy continues to open up, people are showing up to fill the available jobs. That’s one message from the February Employment Report released today by the state Employment Security Department. The report draws on estimates from the U.S. Bureau of Labor Statistics.

From the press release:

“The February increase in state employment was the largest monthly increase since last July,” said the Employment Security Department’s (ESD) Economist Paul Turek. “The gains were broad-based with just about every major industrial sector having increased its payrolls over the month.”

That’s solid good news in uncertain times. As the chart at the top of this post suggest, the employment recovery gained strength in the last quarter of 2021.

Based on a BLS survey of businesses and governments, Washington gained an estimated 191,900 jobs from February 2021 through February 2022.

The release summarizes: “Workers show more signs of stepping back into the job market.”

In all, a good trend.