The New York Times reports that Washington experienced state revenue growth of 2.5% during “the pandemic period.” As the NYT map below shows, revenue collections among the has varied greatly. 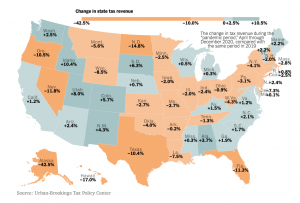 …new data shows that a year after the pandemic wrought economic devastation around the country, forcing states to revise their revenue forecasts and prepare for the worst, for many the worst didn’t come. One big reason: $600-a-week federal supplements that allowed people to keep spending — and states to keep collecting sales tax revenue — even when they were jobless, along with the usual state unemployment benefits.

A researcher at the Urban-Brookings Tax Policy Center, a nonpartisan think tank, found that total state revenues from April through December were down just 1.8 percent from the same period in 2019. Moody’s Analytics used a different method and found that 31 states now had enough cash to fully absorb the economic stress of the pandemic recession on their own.

The head of Idaho’s Division of Financial Management, Alex J. Adams, said in an interview that the rebound had taken officials by surprise, and that they thought one reason was an influx of new residents from California, seeking to escape that state’s high cost of living — a trend that started before the pandemic but accelerated last year. Mr. Adams also said Idaho didn’t pause construction when the lockdowns happened, which helped economic activity.

Idaho’s Republican governor, Brad Little, said in his State of the State address in January that 2020 revenue collections were strong enough to send $295 million back to the taxpayers, and still have enough to invest in better highways, bridges and broadband access.

As Congress considers a $1.9 trillion stimulus package these numbers, as the story points out, will factor into the debate.

The Wall Street Journal also has examined state and local revenue growth during the pandemic.

State and local governments in early 2020 expected the pandemic-induced downturn to decimate their budgets, as millions of business closures and layoffs wiped out tax revenue.

In many places, the fiscal picture hasn’t been nearly as dire as feared.

A flood of federal aid for businesses and households helped prop up incomes and consumer spending. Unemployment fell and economic activity picked up much faster than expected. Unlike in previous recessions, equity and housing markets have done well.

All of those factors bolstered state and local revenues last year.

The variation among states, again, is substantial.

By contrast, 26 states reported revenue declines in the first 10 months of the pandemic, including nine where revenues dropped more than 5%. Five states—Alaska, Florida, Hawaii, North Dakota and Oregon—experienced double-digit declines.

Another factor cited in the reports is the health of state reserves. Washington, as we’ve written, is among the states that entered with COVID recession with a healthy rainy day account.

The Washington Research Council reports the state may be in line for much more money under the stimulus package under consideration in Congress. WRC senior analyst Emily Makings writes,

The U.S. House of Representatives has passed the aid package proposed by President Biden. The $1.9 trillion price tag includes many different pots of money. Jerry Cornfield of the Everett Herald reports that federal grants to Washington would increase by at least $7.6 billion under the bill.

I don’t think that figure includes the bill’s state and local fiscal recovery funds. This pot of money is similar to the coronavirus relief fund (part of the CARES Act), but it is even more flexible. The $350 billion fund could be used to respond to the public health emergency and its negative economic impacts, and it could be used to replace lost revenue (relative to revenue projections as of Jan. 27, 2020).

The most recent revenue forecast in Washington on Jan. 27, 2020 was the Nov. 2019 forecast. Compared to that forecast, there is currently a revenue shortfall of $1.226 billion through 2021–23. (There is not, however, a budget shortfall.) So Washington could use its federal allocation to move $1.226 billion into the general fund. Any allocation on top of that would have to be spent responding to the emergency.

Perhaps someone can explain why lawmakers continue to argue for new and increased taxes.