Washington ranks among the nation’s “innovation leaders,” according to the Consumer Electronics Association inaugural scorecard. (Report pdf here.) As the map below shows, that’s a second tier ranking, about which more later. Different choices by CEA would make Washington an “innovation champion.” 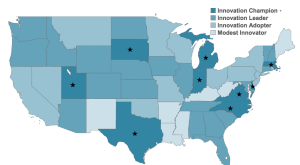 The CEA uses 10 factors (although some states don’t receive a score on one or two of them). Each factor is weighted equally and the overall (composite or average) score is calculated. As is always the case, the selection of factors can be questioned. Below is Washington’s score. 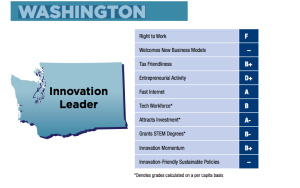 The first factor stands out. Either a state is a “right to work” state or it’s not. The assigned grades, then, are A+ or F. Drop that factor and Washington would score much better. (Ignore the obviously contentious RTW politics; it’s nevertheless legitimate to question the degree to which RTW legislation plays into the innovation economy, particularly when one considers the tech concentration is places like the Puget Sound metro area and Silicon Valley.)

We cite the study because it has received some media attention and will likely receive more. Citation is not an endorsement. Generally, the subcomponents of these reports are much more interesting and useful than the composite scores, which are influenced by the choices of which factors to include and how they are weighted.

In our view, factors like STEM education, support for R&D, the presence of an educated workforce, a high performing transportation system, and reasonable tax and regulatory policies are the best indicators of an economy and policy environment conducive to innovation and shared prosperity.