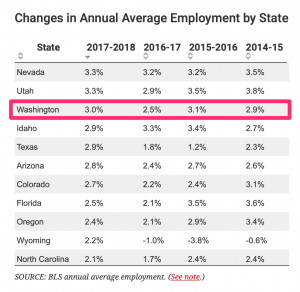 Last year was another strong year for the economy as most parts of the country continued to add sufficient numbers of jobs.

States with the strongest growth in recent years, mostly in the western U.S., continued to lead the way in 2018.

As the table at the top of this post, taken from the magazine, shows, Washington’s 3.0 percent job growth in 2018 ranked third in the nation, behind only Nevada and Utah. The other recent years shown look pretty good.

Again, the urban-rural divide in our state shows up in the data.

Another western state, Washington, recorded an annual average gain of 3 percent and a year-over-year increase of 3.1 percent. The Seattle metro area accounted for about 63 percent of the state’s net increase — slightly more than its share of the state’s employment base.

Crosscut columnist Knute Berger has some thoughts on the urban-rural divide in our state. He notes the politics:

Pollster Stuart Elway has pointed out that in his surveys of voter attitudes, the East-West Cascade divide is really more of a rural-urban divide. Eastern Washington cities like Spokane tend to vote more like Seattle, despite being in the middle of red rural areas. In Western Washington, many rural areas that used to vote Democratic have been leaning more Republican in recent years. Southwestern coastal Washington, for example, used to be a Democratic stronghold, but backed Donald Trump in 2016.

Areas of common and bipartisan interest should include agriculture — buying local to support the farmers who sell at your neighborhood farmers market; paying more attention to the protection of ag lands; and backing balanced policies that can help farmers thrive, like those promoting foreign trade.

In that vein, the state Legislature needs to make more progress on high-speed broadband internet access for all communities in rural Washington.

It’s an interesting analysis. For more on the national and local urban-rural divide, see here and here.