North Carolina has built one of the country’s strongest business climates over the past two decades, fueled by low business costs, incentives and a young, educated workforce, many of whom have been trained at the strong universities in the state and Research Triangle Park. 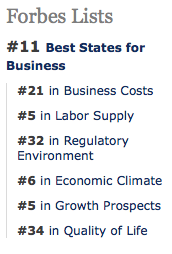 That low quality of life ranking often bugs Washingtonians. What Forbes calls quality of life isn’t what most state residents think of when they boast of life here. Here’s the QofL take from the magazine’s Behind the Numbers statement of methodology.

Quality of life takes into account cost of living from Moody’s, school test performance via the Department of Education and crime rates from the FBI. We factored in the mean temperature in the state as a proxy for the weather and the number of top-ranked four-year colleges in the state from Forbes’ annual college rankings. We considered the culture and recreational opportunities in the state based on an index created by Bert Sperling, as part of our annual Best Places for Business and Careers. Other factors: commute times from the U.S. Census and select measures like air pollution and primary care physicians from the United Health Foundation’s America’s Health Rankings.

These lists are useful reference points, as we’ve written in the past. And it’s always better to be near the top than sitting at the bottom. The low marks for business costs and regulatory environment in Washington reflect concerns we have cited in our foundation reports in 2015 and 2017. In the 2017 report we wrote,

And with respect to regulation,

Economic growth through innovation and entrepreneurship is also affected by the state’s regulatory environment. Over the decades, Washington has added new regulatory systems intended to protect the natural and built environment. That said, the Pacific Research Institute ranks Washington No. 42 in regulatory burden on a scale that has No. 1 as least burdensome. This is reflective of regulatory regimes that oftendo not fit well together, multiple layers of regulation, and requirements that contradict one another in intent and practice.

Washington has many advantages as a state in which to do business; many of them the result of the spectacular success of the state’s leading industries, a big reason for the #5 ranking in growth prospect and #5 ranking in labor supply, measured in part by net migration and population growth. In areas where public policy plays a leading role – business costs and regulation – there’s still work to do.