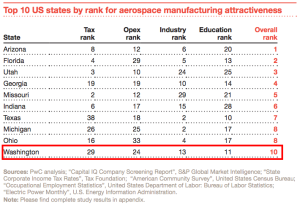 Note the tax ranking: 29th best in the nation. That may surprise critics of the aerospace incentive program passed by the Legislature and signed by the governor in 2013.

PwC bases the tax rankings on unemployment taxes, property taxes and corporate taxes. Washington has typically been rated a high cost state for aerospace manufacturing. The Washington Research Council in 2014 reviewed the data.

There is clear evidence that the state’s tax structure fell heavily on the aerospace industry before 2003. In 1994, DOR’s research department conducted an extensive study benchmarking the taxation of manufacturing in Washington against 11 other states. The result: “Washington is usually one of the top three states for tax liability” (DOR 1994). For aerospace taxation, Washington ranked 4th highest for a large established firm and highest for a new firm. Three of the comparison states have significant aerospace sectors: California, Texas and Alabama. While taxes in California were somewhat higher than in Washington, taxes in both Texas and Alabama were lower. In the case of Texas, taxes were 20 percent less than Washington for the new firm and 28 percent less for the established firm.

Prior to the enactment of tax incentives in 2003, the B&O tax was particularly burdensome for aerospace. An analysis prepared in 2002 for the Washington State Tax Structure Study Committee (which was chaired by Bill Gates Sr.) found that the aerospace industry’s effective B&O tax rate (calculated as the ratio of taxes paid to value added) was 2.63 percent, third highest among Washington’s industries. The average industry’s effective B&O tax rate was 1.53 percent, more than 40 percent lower than that for aerospace.

All told, the 2003 and 2013 tax incentive packages leveled the playing field, making Washington more competitive with other states.

A reasonable adjustment to maintain the industry cluster in the state.

Other points from the PwC report are encouraging. Washington ranked No. 11 in education attainment. PwC writes,

The category of education is critical not only for companies trying to meet today’s demands, but in ensuring tomorrow’s workforce can help build the next generation of more efficient, sustainable aircraft. An educated, technology-savvy, and diversified workforce is essential for maintaining US competitiveness in commercial aviation manufacturing. Some companies are actively participating in the process of preparing the future workforce.

In our state, our technology and aerospace firm have led efforts to improve education and boost access to training in high demand fields.  More needs to be done, as we note here.

The PwC report includes a global ranking. The U.S. comes in first, but posts a ranking of No. 22 in costs.

It’s a useful reminder of the intense competition among states and nations for investment and job creation, and of the factors that influence decisions.