Washington gets mixed reviews in the 2015 Building a Grad Nation report. The state still shows up as a performance laggard. But the innovative Road Map Project in Seattle and South King County is singled out as a success story.

This map from the report shows how the states are doing. To see state-by-state numbers go to the interactive map in the this report overview. ACGR stands for Adjusted Cohort Graduation Rate, a measure that tracks students who enter high school together, adjusting for transfers. 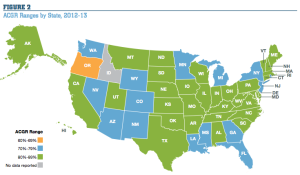 The record high American graduation rate masks large gaps among low income students and those with disabilities compared to their peers.

There are also wide disparities among states in how well they are tackling the issue.

Washington is on the wrong side of the disparities.

Graduation rates among the states vary, ranging from 90 percent in Iowa to 69 percent in Oregon.

Gains have been fueled, in part, by large growth in some of the nation’s largest states, including California, Florida, Georgia, and North Carolina. But 15 percent of the nation’s high school students attend school in New York, Illinois, Washington and Arizona, where rates are declining or stagnating.

About Washington, the report says there’s reason to be concerned.

Worrisome for the nation is the [recent] performance of New York, Illinois, Washington, and Arizona, which, combined, educate about 15 percent of the nation’s high school students … Washington State experienced no improvement [from 2011-2013].

There’s a wealth of detail in the report, which examines progress toward a 90 percent graduation rate for all students by 2020. The researchers examine quarterly performance, each quarter being a 5-year period from 2001 to 2020. We’re currently in the third quarter, 2011-2015, with data available for 2011-2013.

While overall the report finds that the nation is on track toward meeting the 90 percent goal,

As the third quarter comes to a close and the fourth and final quarter begins, the nation will need to double down on its efforts to increase graduation rate outcomes for low-income, minority, and special education students, and continue driving progress in big states and large school districts, where the majority of the country’s student population resides.

The good news for Washington, the research finds, is in urban innovation. Citing a California leader’s comment that “graduation is a solvable problem,” GradNation identifies the Road Map Project as one of the solutions.

…in Washington State, the Road Map Project, serving south King County and the southern, high-poverty area of Seattle Public Schools, set a goal is to double the number of students on track to graduate ready for success in college and career by 2020…

Setting a new national model for improvement, the RMP collaboration is led by the Community Center for Education Results (CCER) with the Puget Sound Educational Service District (PSESD)…

…true to original college readiness goals, by the Class of 2013, 58 percent of RMP 11th and 12th grade students had taken one or more advanced courses (AP, IB or Cambridge Curriculum), and African American students increased their AP participation by 9 percentage points.

Tacoma, too, is singled out for its successful innovations.

Eight years ago, all of Tacoma’s comprehensive high schools were named to the dropout factory list developed at Johns Hopkins University’s Center for Social Organization of Schools. Today, the graduation rate is 78 percent.

Three years ago, the Washington State superintendent named Tacoma the first district Innovation Zone. Schools adopted different improvement practices, and there is now open enrollment throughout the county. There has been a keen emphasis on motivating and supporting students in going to college.

In our research report, we identify increasing high school graduation rates as a top priority. We noted,

The Washington State Board of Education has established a goal of increasing that number to 89 percent by the end of this decade. The state must meet or exceed this objective to become one of the top 10 states for high school graduation.

Although Washington continues to lag, the state’s urban districts are making progress. The progress must continue to expand opportunity for all students in our state.