The National Center on Education Statistics has released a new study that shows Washington’s education benchmarks as ranking in the “basic” range among the proficiency standards set by the states. From the study overview:

Since standards vary across states, the results of the various state assessments cannot be used to directly compare students’ progress. However, by placing a state standard onto the NAEP scale, a common metric for all states, a NAEP equivalent score of that standard is produced, which can be compared across states….

The 2017 edition of this report highlights the results of mapping state proficiency standards onto the NAEP scales using state assessment results from the 2016–17 school year and the 2017 NAEPassessments for public schools. The study focuses on the reading and mathematics standards that states set for grades 4 and 8. For each state, the report displays the NAEP equivalent scores with a range of 0 to 500. The NAEP equivalent scores are shown with respect to the NAEP achievement levels: NAEP Basic and NAEP Proficient.

We’ve pulled the graphs for the four assessments. Note: 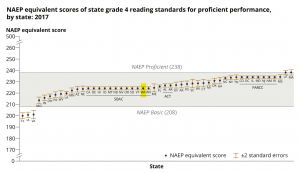 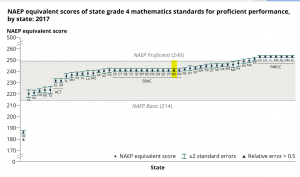 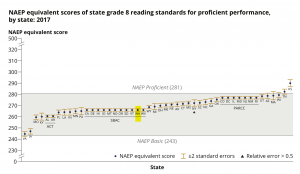 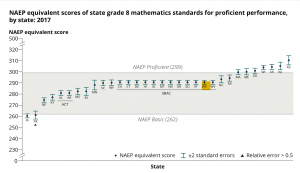 As the graphs show, Washington ranks roughly in the middle and in the basic range. The researchers point out,

The study is not an evaluation of the various state assessments or of the qualityof the states’ achievement standards, and the findings should not be interpreted as evidence of deficiencies in state assessments or in NAEP. It should be noted that state assessments and NAEP may vary in format and administration because they have different goals and are developed for different purposes. The mapping of the state standards does not imply that the NAEP achievementlevels are more valid than the state standards or that states should emulate NAEP standards. A wide range of policy considerations are involved in setting achievement standards, and what is appropriatefor NAEP may not be the best fit for a given state.

There’s a lot of detailed discussion in the report, which is recommended for those looking for more in-depth analysis.

Washington state’s exams for math and reading still set a lower bar for proficiency than the federal government’s national test.

But officials and experts say that’s not all that bad because the national benchmark is pretty high.

In all categories, Washington’s benchmarks fell into the government’s “basic” range, similar to many other states. Some states such as Massachusetts, New Mexico, Kansas and Oklahoma defined proficiency at higher levels.

We should point out, our Scorecard uses the NAEP tests.

Overall, the new report, based on national tests administered in 2017, found that most states’ definition of proficiency fall into the national definition of “basic,” and that state benchmarks have gotten closer to each other since the study’s first release in 2007.

“When we started this study back in the early 2000s, states weren’t really happy about this study because it was revealing that they all had different conceptual frameworks about what was proficient,” [Peggy] Carr [associate commissioner of assessments at the center said. “I think now that we are revealing what everybody is doing via a common metric they are second-guessing where they are deciding to draw their cut points. So what you’re seeing for the most part is the bottom is coming up.”

Indeed, the study shows significant growth in each subject for each grade. For example, of the 43 states with available data for comparison, 40 had grade 4 reading standards for proficiency at or above NAEP’s basic level in 2017 compared to just 17 states in 2007.

Overall, good news, for the nation and our state.